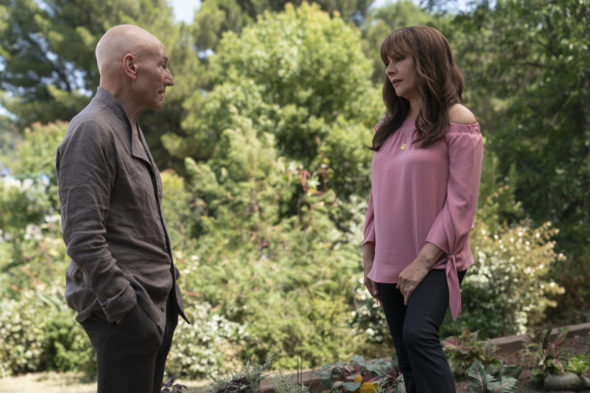 Star Trek: Picard brought back Patrick Stewart and several others from Star Trek: The Next Generation earlier this year, but two members of the cast initially declined to reprise their roles.

Per Trek Movie, TNG vets Brent Spiner and Marina Sirtis both said no to returning for Star Trek: Picard, but they both ended up changing their minds. Spiner appeared as two characters on the CBS All Access series, and Sirtis returned with TNG co-star Jonathan Frakes.

Spiner said the following about his return:

“I had no intention of being in the show, obviously. Patrick had said that the season will have to do with Data. So, I was trying to come up with stuff. I wanted to be on the show, but I didn’t want to play Data. I pitched an idea to Patrick about playing a different character. He took it back to the powers that be and they got back to him and said, “Well that is really interesting, but we don’t think we are going to go that way.” And I was like, “Okay, no big deal.” My manager got a phone call saying the guys who are putting the show together would like to meet. I said, “Fine,” and went down and had a meeting. They were hugely impressive guys to meet. Alex [Kurtzman] and Akiva [Goldsman] and Michael Chabon, these are incredible writers. It is an incredible pedigree. Michael Chabon has won a Pulitzer.”

Sirtis initially turned down the appearance because she was busy with a theater project. She said the following:

“When I did hear about it, I actually had to turn it down because I was doing a play in London. The dates clashed. But, the wonderful people over there at Picard basically fixed it so that we shot out of sequence. I shot my stuff with Jonathan [Frakes] in the middle of a different episode. Everything is streaming now, so they can do that kind of stuff. It’s not like when we were shooting on actual film and shot a month in advance before the show was on the air, it was a very different time. So, it worked out and I am very happy it worked out.”

What do you think? Were you happy to see Spiner and Sirtis again on Star Trek: Picard?

Correct me if I’m wrong, but didn’t Seven of Nine get married to Chackotay? What ever happened to him? No mention of him? Now she likes girls? Seems like a lack of continuity to me, no matter what your feelings on the subject.

No, they were not married in a different timeline seven died and Tuvok was sick so Janeway went back in time and changed events. Chakotay and Seven were on there fourth date when they found there way back to the alpha quadrant so they may or may not have gotten married

I get teary eyed just as with the others…..awesome!

I’m 66 and have been a trekkie since the beginning and, I think is, simply, the best Star Trek since TOS.

I am so happy for a new Star trek series I am almost 30 years old and have watched every episode of everyone ever made DS9 is my bag but next generation will the special place in my heart me and my dad used to watch him when I was a little guy we still do as a matter of fact. I would love to see Guyana come back in The following season and I would love for you guys to start working on deep space nine formatted spinoff I know you have plans for a spin-off with section 31… Read more »

Poor Marina and Data have not aged well, especially for a robot. Never heard of a robot having to go on a diet. The whole situation with this show is just kind of sad. It is a shame they couldnt have done it 10 years ago. Picard looks so frail and ghostly. It seems almost like elder abuse, similar to the Joe Biden situation. They must be wheeling Stewart around the set between takes. The first episode aired free and it made me physically ill watching it. Also, some of the worst CGI of late. Therefore, it is probably destined… Read more »