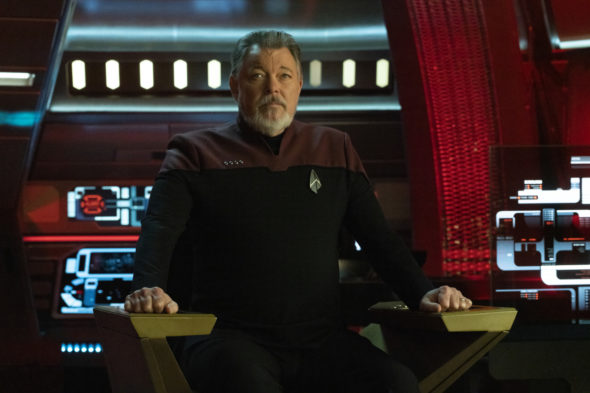 Star Trek: Picard brought back some familiar faces from the world of Star Trek: The Next Generation for its first season and at least one of the returning faces wants to come back for more during season two. Jonathan Frakes appeared on both shows as William Riker, and he appeared in uniform again before the season wrapped.

Frakes revealed during a charity event that happened recently that he had not been in front of the camera in ten years. Returning as Riker was a bit of a challenge. He said the following, via Trek News:

“I was comfortable about halfway through the first day. I had just [directed] two episodes, so I knew where Patrick [Stewart] was… he was as great as he’s ever been. And Marina [Sirtis] was just closing, having starred in a play in the West End in London, so I knew her acting chops were in great shape. I hadn’t acted in a decade and I really didn’t want to get buried by my friends. So [Michael] Chabon, stuck me a script… and I was working on it every morning. One morning, Genie [Francis] said ‘Do you want me to run those with you?’ I said ‘Yeah, I think I’ve got them.’ So I started to run the lines and it was clear to me that I was woefully unprepared. So Genie gave me the script back and said ‘You better keep working on this.’”

As for the second season, he does want to return. He said the following:

“I did find myself getting into the lean, as soon as I sat down. I liked that scene, actually. I was wary if we had gone to the well to have Riker show up again because he had just said he had left Starfleet. I think between Akiva [Goldsman] and [Michael] Chabon] and Alex [Kurtzman], they really wove it into the story… and I hope we see him again.”

A premiere date for season two of Star Trek: Picard has not been revealed. Season one appeared on CBS All Access, but the service is going through a rebranding.

What do you think? Do you want to see Riker back for season two?

I will gladly watch the new season of Picard and love Jonathan Frakes, but I’ll only do it if it doesn’t appear on CBS All Access or any other station that I would have to pay additional money to view. I’d love to see it on AMC. Cable is expensive enough without all these other superfluous stations getting into the picture.

Yes to Riker back – most definitely.
Love Randy Ware’s idea of a new TNG – loved that show.

Hell yes! I want Riker actually to not only appear on the show as a regular character but also have a spin off show – a reboot of TNG! I want him as the Captain of the Enterprise, and I want Geordi, Data, Crusher(s), Troi, Worf, and any other characters they can get back. Call it TNG Revisited, picking up where it left off – a new season 8!

OMG!!! OH …. I would love to see Riker back…because he is very animated and holds his grounds…. Fire at will .. !!!
Jobie Ramos San Jose CA …LLAP!!

Would dearly love to see Riker back!!!

Had high hopes for this after a pretty darn good premiere but it went downhill quickly after that. Bad writing, glacial pacing, mostly unlikable characters and an enfeebled Picard render it nearly as unwatchable as Discovery, though I did watch all episodes in the futile hope that the show would improve. Now, you’ve got the upcoming Pike and Number One series, plus possibly the Georgiou series, from the same braintrust. Doesn’t give me a lot of hope, because to semi-borrow an adage from Scotty, “fool me twice, shame on me; fool me three times, shame on you!