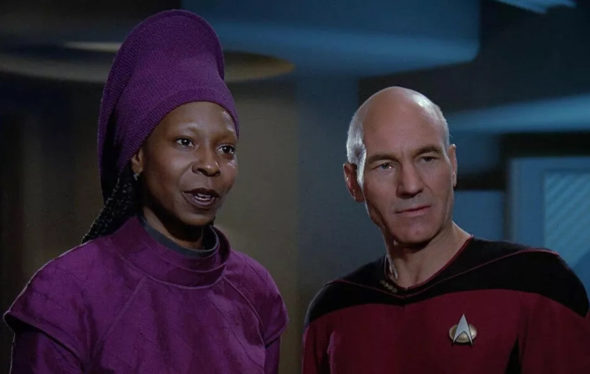 The premiere date for Star Trek: Picard has arrived, and Patrick Stewart has been making the rounds to promote the new Star Trek series. On Wednesday, he stopped by The View, where his former Star Trek: The Next Generation co-star is now host, and he had a question to ask Whoopi Goldberg before he chatted about the new series.

During a special moment, he formally invited Goldberg to appear on season two of the series. According to Deadline, he said, “I’m here with a formal invitation, and it’s for you, Whoopi. Alex Kurtzman, who is the senior executive producer of Star Trek: Picard, and all his colleagues, of which I am one, want to invite you into the second season.”

She appeared on the Star Trek series as Guinan, the bartender of the USS Enterprise. She often gave Picard and other members of the crew advice on personal matters. She joined the series during its second season.

Goldberg was noticeably shocked by the offer, but she said yes when Picard asked her again during a hug. Several former Star Trek stars are appearing on season one. This includes Jeri Ryan and Brent Spiner.

The CBS All Access series was renewed before its premiere. Fans will see a 10-episode season one starting today.

Check out Patrick Stewart’s appearance on The View below.

What do you think? Are you excited to watch Star Trek: Picard? Do you want to see Guinan back to help her old friend on the series?

It would be wonderful to Whoopie back as Guinan!