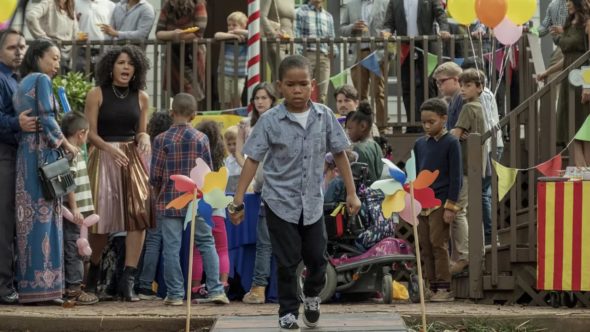 Will the world learn about Dion’s powers in the first season of the Raising Dion TV show on Netflix? As we all know, the Nielsen ratings typically play a big role in determining whether a TV show like Raising Dion is cancelled or renewed for season two. However, streaming services like Netflix collect their own data. Because many viewers feel frustration when their viewing habits and opinions aren’t considered, we invite you to rate all of the first season episodes of Raising Dion here. *Status update below.

A Netflix drama, Raising Dion stars Alisha Wainwright, Ja’Siah Young, Jazmyn Simon, Sammi Haney, and Jason Ritter with Michael B. Jordan, Ali Ahn, and Donald Paul in recurring roles. The series follows the story of a woman named Nicole Warren (wainwright) who is left to raise her son, Dion (Young), after the death of her scientist husband, Mark (Jordan). The normal dramas of raising a son as a single mom are amplified when Dion starts to manifest several magical, superhero-like abilities. Nicole works to keep her son’s extraordinary gifts under wraps with the help of Mark’s best friend, Pat (Ritter). With Mark gone, Pat loves Nicole and Dion like family and has a special bond with the boy. Nicole and Pat protect Dion from people who are out to exploit him while trying to figure out the origin of his abilities.

What do you think? Which season one episodes of the Raising Dion TV series do you rate as wonderful, terrible, or somewhere between? Do you think that Raising Dion on Netflix should be cancelled or renewed for a second season? Don’t forget to vote, and share your thoughts, below.

*1/3/20 update: Raising Dion has been renewed for a second season on Netflix.

I was so surprised at how much MORE this show was than what I expected! (Whoever wrote the blurb about the show for Netflix should be fired!) It’s not just about a mom trying to raise her son responsibly in light of his powers. It has love, loss, intrigue, an evil corporation, the supernatural, comedy, and drama. A must watch! I dwcided to rate t because it deserves viewers, and it needs apl the help it can get after looking so half-interesting in its description. I’d rate it a solid 9.0 -9.5! If you like Stranger Things, give Raising Dion… Read more »

I’m not really an avid TV or movie viewer but once I watched the 1st couple of episodes I could not stop!!! I watched the whole series 3 each day I saw it (3 days time). LOVe IT! Can’t wait for season 2. The final episode took me by surprise! Awesome hope everyone enjoys it! As an adult I got hooked! It’s not a kid show or drama as the poster make appear it to be, you’ll be surprised. Enjoy!

This is the best show on netflix. All of the episodes were the best reality super natural experience I seen so far. I hope season 2 will eventual be made in to reality!