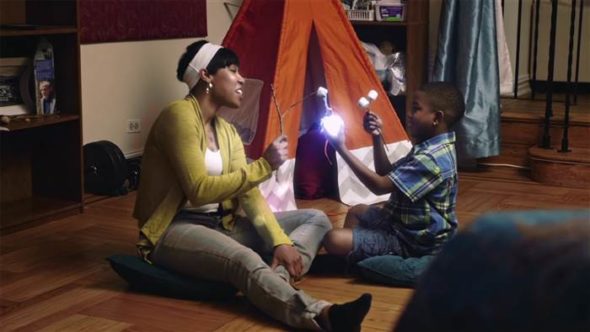 TV show description:
Based on Dennis Liu’s short film, Raising Dion follows the story of a woman named Nicole Warren (wainwright) who is left to raise her son, Dion (Young), after the death of her scientist husband, Mark (Jordan).

The normal dramas of raising a son as a single mom are amplified when Dion starts to manifest several magical, superhero-like abilities. Nicole works to keep her son’s extraordinary gifts under wraps with the help of Mark’s best friend, Pat (Ritter). With Mark gone, Pat loves Nicole and Dion like family and has a special bond with the boy.

Nicole and Pat protect Dion from people who are out to exploit him while trying to figure out the origin of his abilities.

Series Finale:
Episode #17 — Who You Are
It’s Esperanza’s big night, but Dion and Nicole soon find themselves in a dangerous showdown against a familiar villain and his army.
First aired: February 1, 2022.

What do you think? Do you like the Raising Dion TV show on Netflix? Do you think it should have been cancelled or renewed for a third season?

I really hope they renew Raising Dion! It’s an interesting story line. Will he or won’t he be able to bring his father back from where Pat took him. Will Pat return?

My mom and I never get along but both of us love hanging out together to watch this show! We love it so much! Please don’t cancel it!!! ❤️❤️❤️

We love this show! Please continue. The cast is wonderful and the story is engaging and suspenseful.

Renew definitely! Really good show and acting by the cast–and please continue to film in our ATL

Loved season 1. Please continue with a series 2. Must see where this show goes!

waiting for more series. I love it, please don’t cancel it. I need 100 seasons of this show 😀

I hope Raising Dion gets picked up for a second season. Love this show!!

This show became a sit down for my whole family. Thank you. Loving it. Bring on season 2 pls. Great work

My wife, son and I all love it. Fun show with some great plot twists.

Never heard of it but now that I have I still won’t watch it.