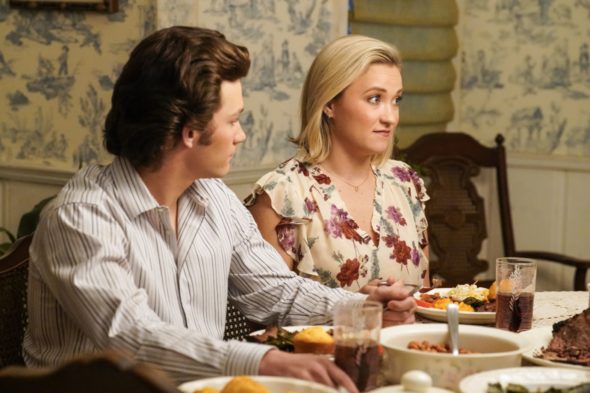 Pretty Smart is not returning to Netflix for a second season. The streaming service has cancelled the comedy starring Emily Osment, Gregg Sulkin, Olivia Macklin, Cinthya Carmona, and Michael Hsu Rosen, per Deadline. The series follows a high-brow Harvard graduate (Osment) after she moves in with her sister and her roommates. The first season of 10 episodes was released in October.

The cancellation news of the Netflix series comes on the day it was announced that Osment will be seen as a regular member of the cast of Young Sheldon (above) for season six next fall. She has had a recurring role on the CBS comedy this season.

Deadline revealed the following about her role in the CBS comedy:

“Osment’s Mandy McAllister is an attractive, strong-willed woman in her late twenties who is struggling with the discovery that she’s pregnant with Georgie’s (Montana Jordan) baby. She’s also dealing with the fact that Georgie lied to her about how young he is.”

What do you think? Are you sad that Pretty Smart will not return for a second season? Do you plan to watch Osment as a series regular on Young Sheldon next season?

I’m happy for her getting to be a regular on Young Sheldon, but with this show being for streaming I’m surprised they couldn’t have made it work…. especially just for a few eps or something after leaving it like that.

This totally sucks. I really liked the Pretty Smart series. As far as I heard and talked about on the boards, everyone had fun thing to say about the series.
I’m sick in the fact that every new series that I come to enjoy from Netflix, gets canceled for some reason. It’s like you guys at Netflix have it all backwords. It’s getting to the point where I’m seriously thinking about dropping Netflix. I mean “what’s the sense” in keep paying for a channel that keeps dropping TV Shows that I like.

I want pretty smart back!!! You cannot just leave the fans like that!! Pleaseeee Emily this is so important! And I love the male actor Greg sulkin with Emily osment!