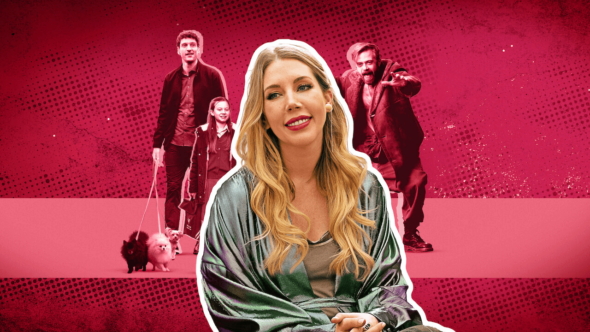 Netflix has cancelled The Duchess TV series so, there won’t be a second season for the British comedy-drama series. The first season of six episodes was directed by Toby MacDonald and released by the streaming service in September 2020.

Created, written, and executive produced by Katherine Ryan, The Duchess revolves around a fashionably disruptive single mom and ceramics artist named Katherine (Ryan) who lives in London and makes powerful and problematic choices for her life. Her daughter, Olive (Katy Byrne), is her greatest love so she debates a second child with her greatest enemy — Olive’s dad, Shep (Rory Keenan). Steen Raskopoulos, Michelle de Swarte, Sophie Fletcher, and Doon Mackichan also star in the series.

News of the show’s cancellation comes from Ryan herself. While being interviewed by Vicky Pattison for her The Secret To… comedy podcast, Ryan was asked about the possibility of a second season. She joked, “You know, I always say, ‘I don’t know, we’ll see’ but [the answer is] ‘No’. I’ll tell you exclusively, ‘No’.”

When asked to elaborate, she noted, “[Netflix] didn’t want to make any more, not enough people watched it. I think something like 10 million people watched it in 28 days and that wasn’t enough. But also, I’m not terribly sad about it. I feel like it’s a whole lot of work for a whole lot of time to make a sitcom and it’s really collaborative. And, I was so grateful to able to make it, but I think it speaks for itself. I kind of like the way it ended. .. I think it’s fine that it just sits on the platform, like a film.”

What do you think? Did you watch The Duchess TV series on Netflix? Are you sorry that the show’s been cancelled and won’t have a second season?

Netflix bites this show was outstanding funny and yet family realness. Netflix is going to find as they are loosing subscribers that they are making to many Hugh mistakes.