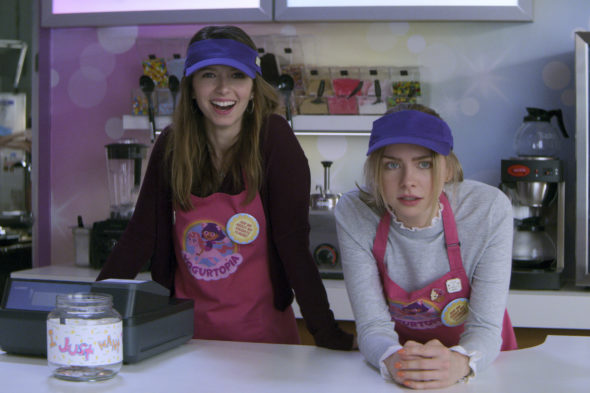 Sterling and Blair have lost their jobs. Netflix has cancelled the Teenage Bounty Hunters TV series so there won’t be a second season according to Deadline. The first and only season debuted on August 14th.

Set in a buttoned-up Southern community, sixteen-year-old sisters Sterling (Phillips) and Blair Wesley (Fellini) accidentally damage their father’s truck. In order to pay for the accident, the high schoolers team up with veteran bounty hunter Bowser Jenkins (Hardison) for an over-the-top adventure as they dive into the world of bail skipping baddies and suburban secrets while, at the same time, trying to navigate the challenges and drama of high school.

What do you think? Have you watched the first season of Teenage Bounty Hunters on Netflix? Would you have checked out season two of this comedy series?

The decision makers at Netflix really need to pull their heads out of their butts! They cut a really good show, hope Amazon picks it up then I’d cut Netflix. There’s so many seriously crappy shows that could’ve been cut & they kept them. It would be nice if those boneheads read these comments & actually gave it another chance.

It sucks that Netflix cancelled this! Hope Amazon picks it up & then I’ll cancel my Netflix subscription. There are a buttload of seriously crappy shows that should’ve been cut, Sure hope the decision makers at Netflix are able to pull their heads out of their asses pretty quick, they’ve only got one show left that I watch

I admit it took a couple of episodes to warm up to it but I really enjoyed watching. The thing that sucks the most is it ended with a cliff hanger. The show should have been given the chance to wrap the storyline up.

This pisses me off. How do you justify this netflix??? All the crap you renew??? This is why we really canceling netflix.

This makes me very sad. Such a great show!