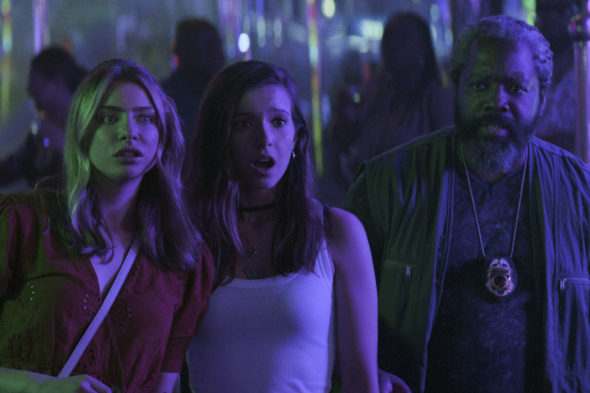 Is bounty hunting easier than algebra class? Has the Teenage Bounty Hunters TV show been cancelled or renewed for a second season on Netflix? The television vulture is watching all the latest cancellation and renewal news, so this page is the place to track the status of Teenage Bounty Hunters, season two. Bookmark it, or subscribe for the latest updates. Remember, the television vulture is watching your shows. Are you?

Streaming on the Netflix subscription service, the Teenage Bounty Hunters TV show was created by Kathleen Jordan who also wrote and co-executive produced the series. Jenji Kohan, Tara Herrmann, Robert Sudduth, and Blake McCormick also executive produce. The comedy stars Maddie Phillips, Anjelica Bette Fellini, Kadeem Hardison, and Virginia Williams. It follows a set of fraternal twins who attend Willingham Academy, a Christian high school in a buttoned-up Southern community. Sixteen-year-old sisters Sterling (Phillips) and Blair Wesley (Fellini) accidentally damage their father’s truck. In order to pay for the accident, the high schoolers team up with veteran bounty hunter Bowser Jenkins (Hardison) for an over-the-top adventure as they dive into the world of bail skipping baddies and suburban secrets while, at the same time, trying to navigate the challenges and drama of high school.

Unless they decide to publicize viewership, it is difficult to predict whether Netflix will cancel or renew Teenage Bounty Hunters for season two. Since Netflix isn’t ad-supported, it can take a chance on series it believes in, but sooner or later it comes down to production costs, versus viewership numbers. Generally speaking, Netflix TV shows which are going to be renewed are usually picked up within a month or so of the series or season premiere. I’ll keep my ears open and an eye out for news, and will update this page with breaking developments. Subscribe for free alerts on Teenage Bounty Hunters cancellation or renewal news.

10/6/20 update: Teenage Bounty Hunters has been cancelled by Netflix.

What do you think? Were you hoping the Teenage Bounty Hunters TV show would be renewed for a second season? Are you sorry that Netflix cancelled this TV series, instead?

this show is full of adventur and it ie exciting