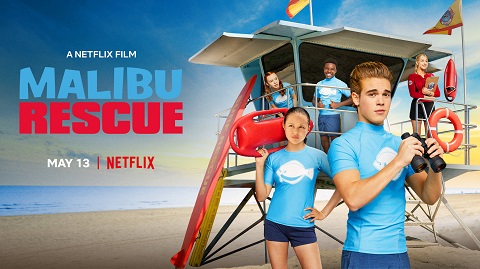 Netflix is heading to the beach. Today, the streaming service announced the premiere date for their new TV show, Malibu Rescue.

The comedy series “follows a ragtag group of aspiring junior lifeguards from The Valley as they compete against the snobby local kids for bragging rights and the ultimate tower at Malibu beach.” The cast includes Ricardo Hurtado, Breanna Yde, Alkoya Brunson, and Jackie R. Jacobson.

Malibu Rescue premieres on Netflix with a film debut on May 13th. The eight-episode series launches on June 3rd.

In the upcoming movie Malibu Rescue, Ricardo Hurtado (School of Rock) will star as Tyler, a handsome know-it-all with a fierce competitive streak and Breanna Yde (School of Rock, The Haunted Hathaways) will star as Gina, a tough and self-assured athlete. The live-action comedy follows a ragtag group of aspiring junior lifeguards from The Valley as they compete against the snobby local kids for bragging rights and the ultimate tower at Malibu beach. Kids and teens alike will root for these heroic and funny underdogs and parents will connect with the positive life lessons for their children. The movie is set to launch May 13th on Netflix.

· Following the movie, Malibu Rescue: The Series will follow the high spirited and scrappy group of novice junior lifeguards after they have staked their claim on Malibu Beach and the wild adventures that fill their days in the sun. The 8-episode series will launch June 3rd on Netflix.

What do you think? Are you a fan of beach comedies? Will you check out Malibu Rescue?

Yes I will watch it