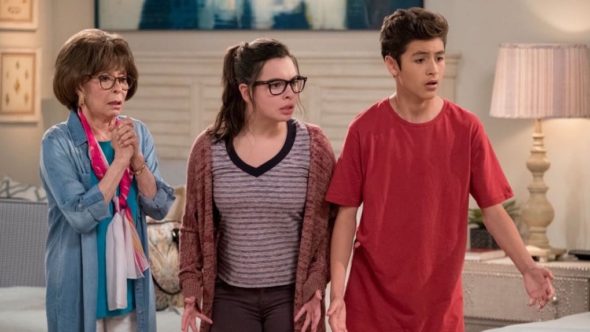 It’s been more than 26 years since the original One Day at a Time sitcom ended on CBS. And now, a reboot of One Day at a Time is coming to the network’s Monday night schedule — albeit a week later than previously announced.

The family sitcom was rebooted in 2017 for Netflix, where it ran for three seasons before being cancelled. Pop TV rescued the series and ordered a fourth season. In a surprise twist, due to a shortage of original programming in the age of COVID-19, CBS has decided to air season four of the One Day at a Time reboot (Netflix retained exclusive rights to the first three seasons).

The plan had been to begin airing episodes on CBS tonight but, due to the NFL’s Patriots vs. Chiefs game being rescheduled, One Day at a Time’s network premiere will take place next week. Both the sitcom and the Manhunt: Deadly Games series will be preempted while Big Brother, whose Sunday installments are being relocated to Mondays, will still air after the game.

Here’s the press note from CBS:

The Network debut of ONE DAY AT A TIME and the third episode of MANHUNT: DEADLY GAMES will be pushed one week, to Monday, Oct. 12.

What do you think? Have you watched the One Day at a Time reboot on Netflix or Pop TV? Do you plan to watch episodes when they air on CBS?

Absolutely. It is one of the best comedy series to grace our screens

I love love love this show can’t.wait for the premiere

I can’t wait to see One Day At Time debut on CBS when the show finally debut.

Anyone that wanted to watch season 4 have already done so on POP. As for me and a lot of other people, I see know reason to start watching season 4 of the show when I never saw the other 3 seasons on Netflix.

I don’t think your first sentence is true for all… I’m sure there are also plenty of people like me who have Netflix but not cable (and thus don’t have access to Pop TV). And Netflix hasn’t added season 4 of ODAAT yet (don’t even know if they plan to), so I actually do have plenty of reasons to watch the new season on CBS next week.

Too many old shows coming back let them die stupid remake don’t understand it all.