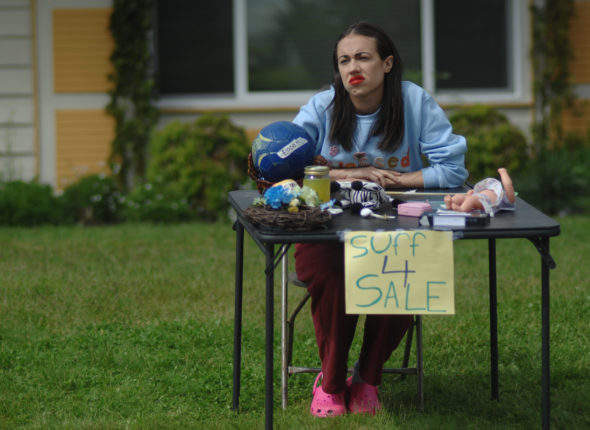 Let your haters be your motivators. Netflix has cancelled its Haters Back Off! TV show after two seasons. Created by star Colleen Ballinger, with Chris Ballinger, the Netflix TV series spun off of the popular YouTube character, Miranda Sings. Angela Kinsey, Francesca Reale, Erik Stocklin, and Steve Little also star.

Haters Back Off! Cancelled After Two Seasons on Netflix

Variety has confirmed Netflix has passed on a third season of Haters Back Off!, and the series has ended after two seasons.

What do you think? Are you a fan of the Haters Back Off! TV series? Is it ending at the right time. Should Netflix have cancelled or renewed Haters Back Off! for season three? Sound off, in the comments.

Netflix’s………. this sucks! You were in a role with Adam Sandler and his movies . Your raising your monthly fees and now taking away shows and keeping all of these BBC tv series and movies! What is that about? Get notice Netflix’s, you put major companies out of business with your genius idea of movies and now your going to be one of those companies that is putting YOURSELF out of business ! Reconsider , please . Thank you

Netflix this was one of my favorite shows on your forum. It did not get a proper ending, and at least deserves and season 3 to continue Bethany and uncle Jim’s plot line, Miranda and Colleen should meet and have a plot line, Miranda’s love life needs to be settled. Since you cancelled so brazenly you should sign them up for 2 more seasons just to make up for your grave error or cancelling this great, different series way before it’s time. BRING BACK HATERS BACK OFF!!! WE WANT MORE MIRANDA SINGS, AND DESERVE TO MEET COLLEEN THE TRUE STAR!!!!

I just started, and recently finished both seasons of Haters Back Off! I LOVED IT!!! I cannot believe Netflix wouldn’t give this show at least a third season.

This show gives me life. It stopped me from feeling so alone in the world, I always felt like an outcast. When I started watching this show it has given me confidence. It is my favorite Netflix series, except ” End of the World. ” I would really appreciate if you would add it back on. Also another season of ” End of the f***** world .” Thank you!

I love this show!!!! Please please please add the third season!! I come home everyday from work and watch it!! I need this show in my life!!!

I just started watching this show and loved it. C’mon, renew it Netflix!

Soooo bummed. I loved this show. “What da heck”-Miranda

This Show is a blunder! I’m happy but not big brother.

Oh no!! We love the show. I guess is back to you tube to enjoy Miranda Sings. Very sad and disappointed over Netflix decision of cancelling.

Am so disappointed about this. Was an incredibly funny show, very different and a great comedy. I remember being so excited for season 2 and the whole family sat and watched it all day. I don’t like the ending the show now has. The family needs to all be happy at the end! So annoyed! Ugh! Netflix, you have made a big mistake.