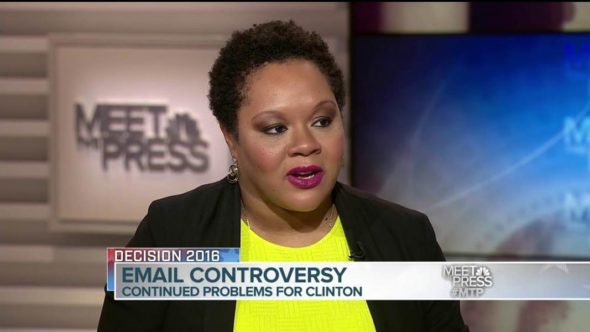 Alcindor has previously served as a political reporter for The New York Times, a breaking news reporter for USA Today, and as a contributor on NBC News and MSNBC.

Alcindor begins her tenure on PBS NewsHour on January 16th.

I’m thrilled to join ‘PBS NewsHour’ in this new role covering President Trump and his impact on our nation. The show throughout its history and during this current administration has produced stellar work that connects federal policy and politics with everyday people’s lives.”

What do you think? Do you watch PBS NewsHour? Are you excited for their new White House correspondent?

She fits the bill for typical PBS hire and checks all the boxes for “female”, “diversity” i.e “affirmative action” hiring, “political correctness” ( as determined by PBS), and yes…articulate. Just wish she could leave her obvious bias at home and takes notes from a true professional such as Gwen Ifill, who at least approached issues, from both sides with honest, difficult, questions, and was never so obviously biased as Ms. Alcindor, in her reporting

I think she know the business, but she speaks too fast. she need to slow down and speak fluently for all to understand what she is trying to get across. it is very annoying to listen to something like that. all due respect : she sounds like a robot.

I watch the PBS News Hour, nightly. A new face is always welcomed just as long as it is unbiased. Anything other than MSNBC, CNN and Fox News.

How can you tell whether or not a report is biased?