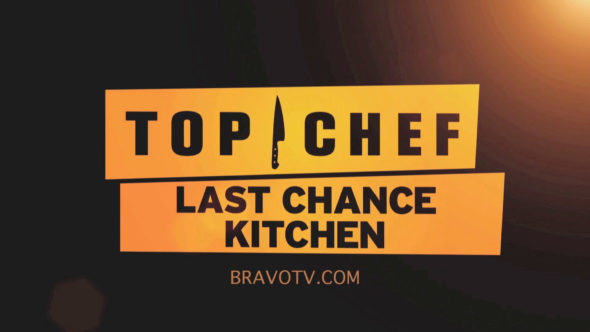 Bravo revealed more about the series in a press release. Check that out below.

“Bravo Media’s Emmy-Winning digital companion series Top Chef: Last Chance Kitchen, hosted by Tom Colicchio, launches today with a bombshell new twist, as four of the fiercest Top Chef veterans enter the kitchen, to battle it out, in hopes of earning a coveted spot in this season’s competition in Colorado. Back to prove they have what it takes is Jennifer Carroll (Season 6 & Season 8: All Stars), Kwame Onwuachi (Season 13), Marcel Vigneron (Season 2 & Season 8: All Stars) and Lee Anne Wong (Season 1). In a series first, “Top Chef: Last Chance Kitchen” is available now on BravoTV.com, dropping one week prior to the “Top Chef” season premiere on Thursday, December 7 at 10 pm ET/PT. The competition begins now; to check out the first episode with the Top Chef alums and find out who must pack their knives first, click here: http://www.bravotv.com/last-chance-kitchen/season/videos/lck-ep-1-catch-me-upquick

Sponsored by Hidden Valley(R), Top Chef: Last Chance Kitchen is all about redemption as these chefs stop at nothing to fight their way into the competition. It’s the ultimate battle royale as host Tom Colicchio sets the stakes high with pressure-filled challenges and a fast moving clock. At the end of each episode, one chef will pack their knives. With their dreams of a Top Chef title on the line, these fierce veteran chefs will not only compete against themselves, but each week will also have to knock out the new cheftestants as they are eliminated from the main competition.

Next week, the main competition begins as Top Chef returns for a brand new season with 15 incredibly talented and diverse chefs from across the country battling it out amid the breathtaking landscapes and thriving culinary scenes in Denver, Boulder and Telluride, culminating in an epic finale in Aspen. Following each episode premiere, the eliminated chefs will have the opportunity to change their fate in the game on Top Chef: Last Chance Kitchen.

Episodes of Top Chef: Last Chance Kitchen will be made available on BravoTV.com, Bravo Now, VOD and YouTube at the conclusion of each week’s Top Chef episode.

Will you check out this new season of Top Chef: Last Chance Kitchen? Tell us what you think.