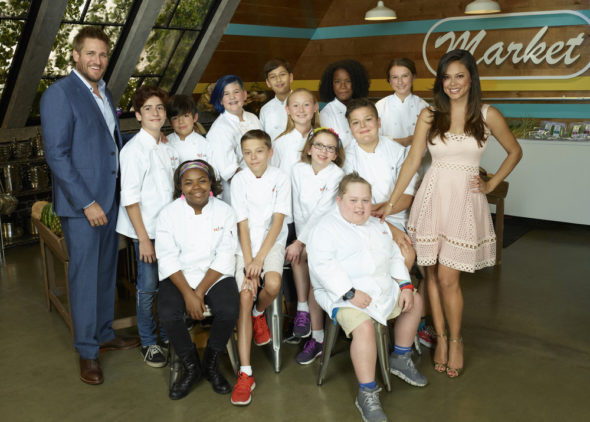 It looks like kids can stand the heat. Universal Kids has renewed its Top Chef Jr TV show ahead of the series premiere. The children’s cooking competition is a spin-off of Bravo’s long-running Top Chef, hosted by Padma Lakshmi, with judges Tom Colicchio, Gail Simmons, Richard Blais, and Graham Elliot.

Premiering October 13, 2017, at 8:00pm ET/PT, Top Chef Jr is hosted by Vanessa Lachey, with Curtis Stone serving as head judge. The program features a dozen young cooks, between the ages of nine and 14, competing for the new title of “Top Chef Jr.” Expect new age-appropriate challenges, as well as some favorites from the original Top Chef TV series, including “Restaurant Wars” and “Conveyor Belt” as well as “Quickfires,” team challenges, field trips around Los Angeles, and of course — eliminations. Universal Kids was formerly known as Sprout.

Although it has not yet been posted to the NBCUniversal press site, Deadline has confirmed the Top Chef Jr season two renewal.

What do you think? Are you a fan of Top Chef, do you plan to tune in for the Top Chef Jr TV series on Universal Kids?

We Love Top Chef Jr !!!! Plan our schedules around seeing the episodes .. even the Season 1 and 2 repeats !
Kids are treated with such respect for their incredible skills . The kids are well chosen. Talented , respectful and articulate !
More please !!
Exceptional programming !