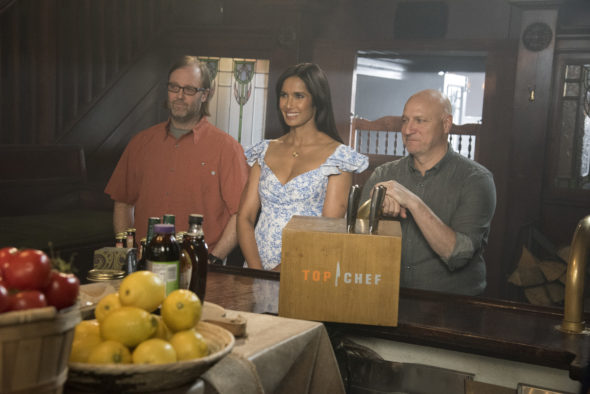 Break out the bourbon! The Top Chef TV show has been officially renewed for a 16th season. The season 16 renewal was expected, as we reported last month, casting was already underway. Production is set to begin this spring, with the season premiering on a date TBD, later this year.

Current Season Continues Thursdays at 9pm ET/PT as the Final Four Chefs Head to Telluride and are Reunited with the Winner of “Top Chef: Last Chance Kitchen”

NEW YORK – February 15, 2018 – Bravo Media’s Emmy and James Beard Award-winning “Top Chef” will call Kentucky home for season 16. The state’s “Unbridled Spirit” will reign supreme as a new batch of cheftestants enter the kitchen to battle it out for the coveted title across the thriving culinary scenes in Louisville, Lexington and Lake Cumberland. With Bourbon, horses and Bluegrass music setting the scene, the culinary competition series will explore this unique region of the country, rising through the ranks as a top destination for foodies and chefs. Production will begin in the spring of 2018 with the season set to premiere later this year. The announcement was made today in partnership with the Kentucky Department of Tourism.

“We are always looking for rising culinary destinations and are looking forward to planting our flag in Kentucky and soaking up a diverse region of the country that we haven’t yet explored on ‘Top Chef’,” said Shari Levine, Executive Vice President, Current Production, Bravo Media. “Kentucky has a strong food identity and we know our incoming chefs will be inspired by the bourgeoning culinary scene, known for its innovative takes on Southern cuisine, melding flavors and use of Kentucky’s agricultural bounty.”

Kristen Branscum, Commissioner of Kentucky Department of Tourism adds, “Kentucky is internationally known for its bourbon and horses, but our rich culinary culture is an unexpected, hidden gem. Our robust agricultural offerings and unique approach to food in every region of the state, combined with Kentucky’s natural outdoor beauty will surprise and delight the ‘Top Chef” viewers.”

With four remaining episodes, the current season of Bravo’s “Top Chef” counts down to the finale in Aspen with host Padma Lakshmi, head judge Tom Colicchio, along with Gail Simmons and Graham Elliot at the judges table. This week’s all new “Top Chef,” airing Thursday, February 15 at 9pm ET/PT, kicks off in breathtaking Telluride as the four remaining chefs embark on the first leg of the finals. As they walk down the quaint Main Street they are quickly reunited with the winner of “Top Chef: Last Chance Kitchen,” and the new group of five face Padma, Tom and Chef Wylie Dufresne. For the Quickfire challenge, they are tasked to make a dish incorporating the old saloon slinging medicinal beverage, sarsaparilla. Then the chefs cook at Alpino Vino, a fine dining restaurant at the highest elevation in North America, where they prepare a dish that must include a baking element. And no chef knows the difficulty of cooking in high altitude locations like Michelin-star recipient Chef Paul Liebrandt who has cooked in the Swiss Alps. It’s a tall order to impress judges of this caliber at just under 12,000 feet up.

Currently averaging over 2 million total viewers, “Top Chef” is the number one most affluent ad-supported cable program in 2018 among household viewers (Nielsen L7).

Casting for Season 16 is currently underway and interested chefs looking to vie for the coveted title, should visit Bravotv.com/topchefcasting for more information. 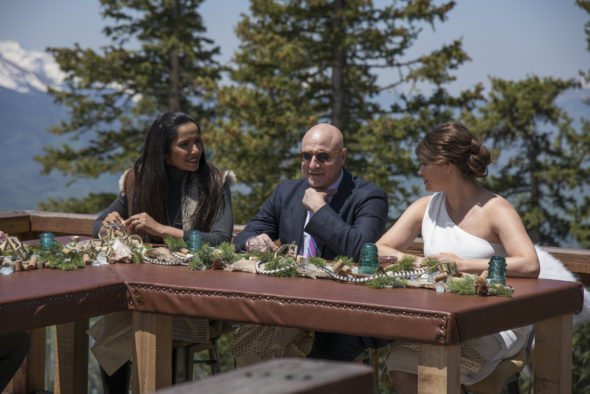 What do you think? Do you still like the Top Chef TV series? Do you plan to check out the 16th season on Bravo?

Top Chef should definitely be renewed

Love Top Chef Till the Bitter Sweet End- May it Never!