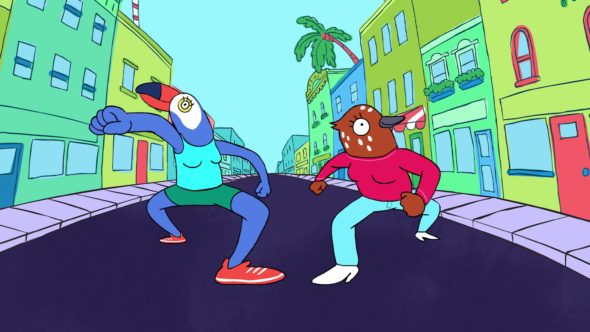 This show’s goose is cooked. Netflix has revealed that the Tuca & Bertie TV show won’t have a second season. The animated comedy has been cancelled after one season of 10 episodes.

The first (and only) season was released on May 3rd of this year and the streaming service has been quiet about Tuca & Bertie’s future. Typically, Netflix makes a decision about a show’s future in the first month after a season’s release so, no news isn’t typically good news.

Today, Netflix broke its silence. “Lisa Hanawalt created a relatable yet whimsical world in Tuca and Bertie. We’re grateful to Lisa, and her fellow executive producers Raphael Bob-Waksberg, Noel Bright, Steven A. Cohen, and EPs/stars Tiffany Haddish and Ali Wong, along with all of the writers and animators for sharing the funny and dynamic female bird duo of Tuca and Bertie with the world. While Tuca and Bertie won’t have a second season, we’re proud to feature this story on Netflix for years to come.”

Hanawalt responded to the cancellation on Twitter and thanked those who have supported the program.

Netflix is not ordering a second season of Tuca & Bertie.

Cast & crew & writers were flawless. Production ran so smoothly, it felt charmed. My IBS flared terribly and the show was better for it!!

Everyone is still glowing over the reviews and articles and feedback. T&B is critically acclaimed and has repeatedly been called one of the best new shows of the year.

Best of all, I still get daily messages and tweets from viewers who connect personally to the characters and stories. The birdsona & plantsona fan art is SO incredible, are you kidding me! And the show is still being discovered by new fans every day!!

Thank you to everyone who loves and supports T&B, and to everyone who was comforted and felt like this show gave you a voice. I’m hopeful we can find a home for Tuca & Bertie to continue their adventures. #TucaandBertie pic.twitter.com/xmrAV7Ooyq

What do you think? Did you watch the Tuca & Bertie TV show on Netflix? Would you have watched a second season?

I’m so sad it won’t get another season. I was really looking forward to the next season. I thought it was really unique and funny. Something completely different, not boring or cookie cutter.
R.I.P Tuca and Bertie
#BringbackTucaandBertie