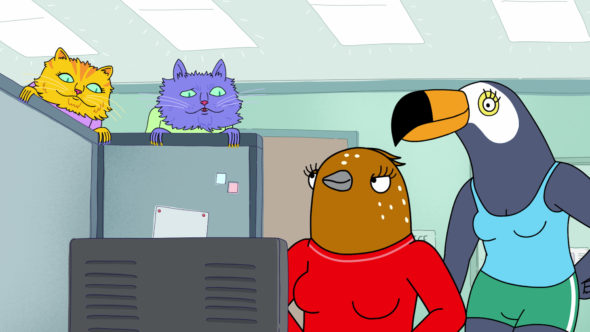 Will Tuca and Bertie’s friendship survive their 30s? Has the Tuca & Bertie TV show been cancelled or renewed for a second season on Netflix? The television vulture is watching all the latest TV cancellation and renewal news, so this page is the place to track the status of Tuca & Bertie, season two. Bookmark it, or subscribe for the latest updates. Remember, the television vulture is watching your shows. Are you?

Unless they decide to publicize viewership, it is difficult to predict whether Netflix will cancel or renew Tuca & Bertie for season two. Although the subscription streaming service doesn’t have to please ad buyers, it does have to program to please its paid members, so eventually, their decision comes down to one of cost, versus viewership, just like broadcast and cable networks. Generally speaking, if Netflix is going to renew, it does so sooner rather than later, and good news typically comes within a month or so of the release date.

Since birds of a feather flock together, I think the series will get a second season. It’s got a name-heavy voice cast, and creator Lisa Hanawalt was a supervising producer on BoJack Horseman, which has done well Netflix. Since this is just speculation, I’ll keep an eye on the trades and press releases and update this page with breaking developments. Subscribe for free Tuca & Bertie cancellation or renewal alerts.

What do you think? Are you glad that the Tuca & Bertie TV show has been renewed for a second season on Adult Swim? Are you sorry that Netflix cancelled this TV series?