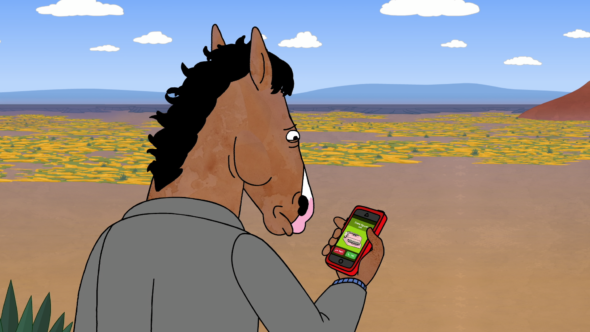 Check out this Netflix press release for more.

One of our “Clingy Execs” texted the pickup news to BoJack Horseman yesterday, and we have video of the texts to prove it.

Will Arnett voices BoJack, the failed legendary ‘90s sitcom star from the favorite family sitcom Horsin’ Around, who has been trying to find his way through a muddle of self-loathing, whisky and failed relationships. Now, in the presence of his human sidekick Todd (Aaron Paul) and his feline agent and ex-paramour Princess Carolyn (Amy Sedaris), BoJack is primed for his comeback.

BoJack Horseman was created by Raphael Bob-Waksberg. The series is executive produced by Raphael Bob-Waksberg, Steven A. Cohen and Noel Bright. Will Arnett (Flaked, Arrested Development) and Aaron Paul (Breaking Bad) also serve as executive producers. BoJack was designed by graphic artist Lisa Hanawalt and animated by LA-based ShadowMachine. The show is a Tornante Production, brought to life by Michael Eisner’s The Tornante Company.

Bam boom, BoJack Horseman season four synopsis, here we go. Okay, so this season is full of all the things people love about their favorite depressed talking horse. First of all, you’ve got BoJack himself, who is up to his old tricks. Then you have Princess Carolyn, who is one cool cat. While Princess Carolyn toys with the idea of starting a family, BoJack has family issues of his own. This season, on BoJack Horseman.

Meanwhile, Diane and Mr. Peanutbutter have family issues of their own. You might say their marriage is “in a pit,” if you know what I mean (which you won’t, until you watch the season). Meanwhile Todd has issues of his own — as he explores his own evolving sexual identity and also in some episodes doesn’t do that. Oh! And Mr. Peanutbutter’s running for governor now; I forgot to mention that, that’s important. Also, in one episode BoJack wears a new hat! Bet you want to tune in to see that new hat, huh? Okay, I lied, there’s no new hat. I just really want you to watch the new season of BoJack Horseman!

What do you think? Are you still watching the BoJack Horseman TV series? How many seasons do you think it could run on Netflix?