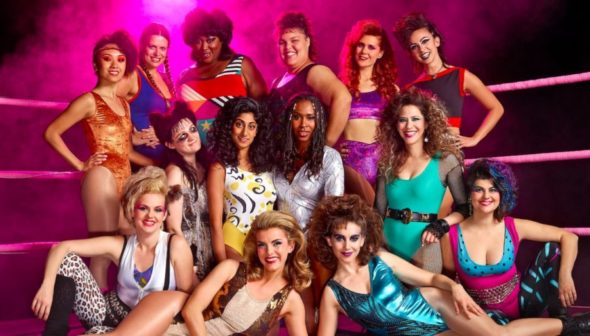 Another TV show won’t be returning due to the ongoing pandemic. In recent months, shows like Stumptown (ABC), The Society (Netflix), and I Am Not Okay With This (Netflix) have all been cancelled due to delays caused by the ongoing pandemic. Now, Netflix has dropped plans for the fourth and final season of GLOW.

The series was renewed for a fourth and final season in September 2019 and the cast and crew were about three weeks into filming when COVID-19 shut down production in March.  One episode had been completed and another had been started.

“COVID has killed actual humans. It’s a national tragedy and should be our focus. COVID also apparently took down our show,” series creators Liz Flahive and Carly Mensch said in a statement to Deadline. “Netflix has decided not to finish filming the final season of GLOW. We were handed the creative freedom to make a complicated comedy about women and tell their stories. And wrestle. And now that’s gone. There’s a lot of sh*tty things happening in the world that are much bigger than this right now. But it still sucks that we don’t get to see these 15 women in a frame together again. We’ll miss our cast of weirdo clowns and our heroic crew. It was the best job. … Register to vote. And please vote.”

Netflix had been working on ways to resume production on the series which is filmed in Los Angeles. Due to the close physical contact and heavy breathing that are part of wrestling, it became clear that filming wouldn’t be able to resume safely for several months, at the earliest.

The series wouldn’t be able to return until 2022 at the earliest (two and a half years after the end of season three) so the streamer was unsure if a large enough audience would tune in to justify the cost. Because of the long delay and heightened production costs, the budget was too high for Netflix to proceed.

All of the series regulars have been paid for the full season. It’s unclear if Netflix might release the completed fourth season footage at some point.

What do you think? Are you a fan of the GLOW TV series? Were you looking forward to watching the fourth and finals season? Would you like to see the completed footage or, hear how the story would have ended?

I was planning to watch Seasons 2 and 3… But I will not watch it anymore because the series final season was cancelled. I also gave up to start watching The OA, Mozart in the Jungle, Sneaky Pete, Marco Polo and Altered Carbon because they were cancelled, for example. No one wanna watch a series that doesn’t have an ending. Netflix and Amazon should at least produce a decent ending of shows that already have multiple seasons, like they did on Sense8. People will eventually watch an ended series if it had a decent ending, but they will not watch… Read more »

Yes we need GLOW to return! I would definitely continue to watch!

Wow, I think it is really time to cancel netflix.

“‘GLOW”s final-season renewal is reversed due to COVID-19.” This is EXACTLY what I feared because of the prolongment of the COVID-19 pandemic: series-es getting cancelled SOLELY because of a virus that’s a total nightmare, because a carrier of COVID being asymptommatic doesn’t stop it from being deadly. I am of the opinion that the cast and crew of “GLOW” should have been planning to re-start production of that show’s final season in 2022 anyway, thereby reversing this cancellation decision once the pandemic has subsided. The potential audience for a show’s finale season not being big enough to recoup the huge… Read more »

With all the crap on nf, they cancel this?

This suck badly cmon now was waiting on this