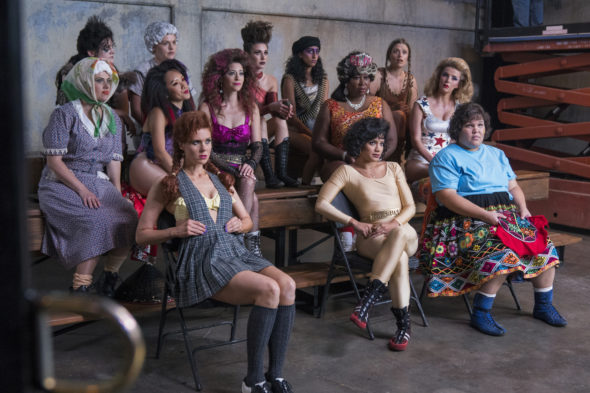 Is Netflix still feeling that new show glow? Has the GLOW TV show been cancelled or renewed for a third season on Netflix? The television vulture is watching all the latest TV cancellation and renewal news, so this page is the place to track the status of GLOW, season three. Bookmark it, or subscribe for the latest updates. Remember, the television vulture is watching your shows. Are you?

A Netflix scripted comedy, GLOW stars Alison Brie, Betty Gilpin, Sydelle Noel, Jackie Tohn, Britney Young, Kia Stevens, Gayle Rankin, Sunita Mani, Marianna Palka, Kimmy Gatewood, Rebekka Johnson, Kate Nash, Britt Baron, Marc Maron, Chris Lowell, Rich Sommer, and Bashir Salahuddin. The fictional series is inspired by the 1980s all-female professional wrestling league and the syndicated G.L.O.W.: Gorgeous Ladies of Wresting TV show. It follows a group of L.A. women at the center of a low-rated cable wrestling series. The series revels in 1980s fashion and culture. In the second season, the women of GLOW are now local celebrities and have to deal with all that entails, while the wrestling grows more difficult and their hair is even bigger.

Unless they decide to publicize viewership, it is difficult to predict whether Netflix will cancel or renew GLOW for season three. Considering the press this show has received, I suspect it will be renewed. I’ll keep an eye on the trades and press releases and update this page with breaking developments. Subscribe for free GLOW cancellation or renewal alerts.

What do you think? Are you glad that the GLOW TV show has been renewed for season three? How would you feel if Netflix had cancelled this TV series, instead?