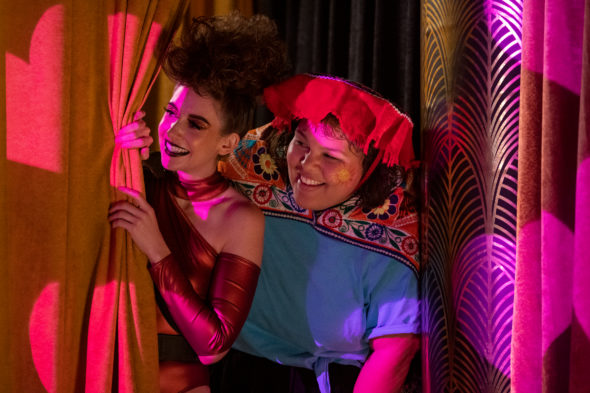 What does the future hold for the ladies of GLOW? Has the GLOW TV show been cancelled or renewed for a fourth season on Netflix? The television vulture is watching all the latest TV cancellation and renewal news, so this page is the place to track the status of GLOW, season four. Bookmark it, or subscribe for the latest updates. Remember, the television vulture is watching your shows. Are you?

Unless they decide to publicize viewership, it is difficult to predict whether Netflix will cancel or renew GLOW for season four. If Netflix is going to renew, they usually make the decision internally within a month and release the news within a couple of months of a season/series premiere. The first two seasons of this series were released in June and the renewals were announced in August. Season three debuted in August so, if good news is on its way, we’re likely to know by October. That said, lately, it has been more difficult for Netflix TV shows to get past the third season, so a pickup isn’t a guarantee. While we wait for word, I’ll keep an eye on the trades and press releases, so subscribe for free GLOW cancellation or renewal alerts.

10/6/20 update: Netflix has reversed its renewal of GLOW for a fourth and final season.

What do you think?  Were you glad that the GLOW TV show had been renewed for a fourth season? Are you sad that Netflix decided to cancel this series after all?

Really enjoyed the show and would love to see a new season.

Very good series, maybe even better than OITNB (from the same creator), I think season 3 has been the best so far, after that cliffhanger it definitely needs at least a season 4 to give a satisfying ending!

Wonderful presentation. I hope the next season when renewed it’s going to even be better