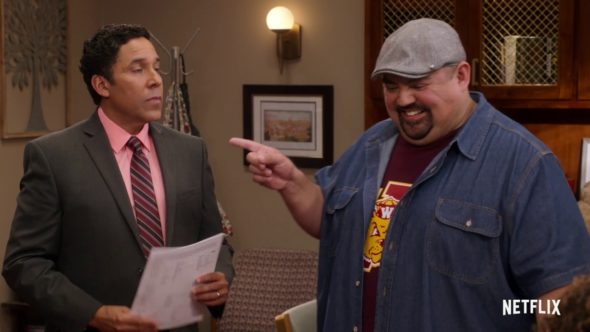 An  ensemble comedy, Mr. Iglesias stars Iglesias, Sherri Shepherd, Gloria Aung, Tucker Albrizzi, Jacob Vargas, Maggie Geha, Cree Cicchino, Fabrizio Zacharee Guido, Coy Stewart, Kathryn Feeney, Richard Gant, and Oscar Nuñez. The TV show centers on Gabe Iglesias (Iglesias), a recovering alcoholic and public school history teacher who plies his trade at his alma mater. When Carlos, an assistant principal and bully, decides to cull some students from the herd to improve the school’s ranking, Gabe resolves to save them. Maybe he can help them realize the potential he knows they have, too.

The first season of Mr. Iglesias was released on June 21st with 10 episodes and is part of a three project deal that Netflix has with Iglesias. He is also doing a pair of standup specials for the streamer.

Series creator Kevin Hench will return as showrunner for season two and will also serve as an executive producer with Iglesias, Ron DeBlasio, and Joe Meloche. There’s no word yet on when the second season will premiere or how many episodes will be produced.

What do you think? Did you watch the first season of Mr. Iglesias on Netflix? Will you watch season two? Were you expecting this sitcom to be cancelled or renewed?

I am glad the powers that be are giving the show a second season. It usually takes a couple seasons to work out the kinks. The cast is great but this second season you will see them a little more in sync. A great comedian on stage, Iglesias is turning out to be quite a good sit-com actor as well. I hope we get to watch many season of Mr. iglesias though Netflix has a history of cancelling great shows. Just ask The San Clarita Diet cast and crew. 3 seasons and gone. Was set up to be an awesome… Read more »

I want 10 seasons if possible like there used to be back in the day when shows used last long. This show is hilarious and I would love to see it keep going for a while. Its a great, awesome and amazing show!!!!

Love it! It was a breath of fresh air! Such a great show and can tell the amazing cast truly gets along. Can’t wait until seat2! Congratulations to Fkiffy he is amazing and genuine!

We loved it! It was put together well! Can not wait Fe season 2! Love love it! Fluffy and cast are amazing and can feel they all get along which is awesome.

mostly standard sitcom stuff, but the personalities of the cast make it an enjoyable show, glad to know it is coming back

How the hell does this get a season two is beyond me.

Fluffy is the best! I’m never bored watching him do his thing.
I never laughed so hard before I found Fluffy! Don’t ever cancel his show, it’ll be a big mistake!

I did watch the first season and am very glad there will be another season. I enjoyed very much.

Season one was so fluffy. I need more fluffy teacher. I glad it’s back for season two.