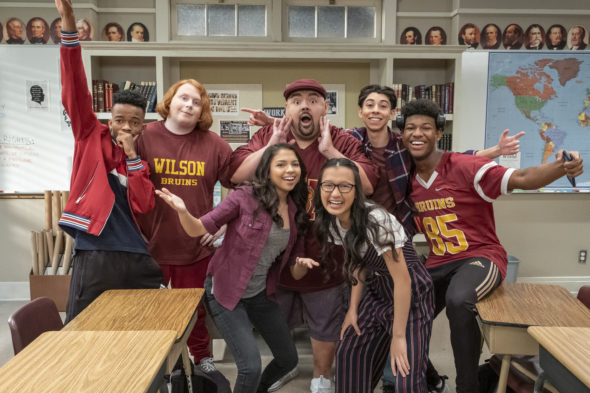 TV show description:
From Gabriel Iglesias and Kevin Hench, the Mr. Iglesias TV show is an ensemble multi-camera sitcom. The comedy centers on Gabe Iglesias (Iglesias), a recovering alcoholic and public school history teacher who plies his trade at his alma mater.

Friendly and kind-hearted, Gabe dedicates himself to kids having a hard time at school, despite their academic acumen. With them, he shares a nemesis in Carlos (Oscar Nuñez), who takes his role as an assistant principal as a license to bully the students.

Gabe’s charges include the gifted Marisol (Cicchino), who despite her brilliance struggles in school, because she has to work multiple jobs; Mikey (Guido), who has a bad crush on her; paranoiac Lorenzo (Stewart); Grace (Aung), who struggles with social anxiety; and Walter (Albrizzi), who is something of a birdbrain.

In addition to Carlos, Gabe’s fellow teachers include Abby (Geha), Tony (Vargas), and Ray (Gant). The whole crew works under the watchful eye of Paula (Shepherd), the well-meaning principal who has her own foibles.

When Carlos decides to cull some students from the herd, in order to improve the school’s ranking, Gabe resolves to save them. Maybe he can help them realize the potential he knows they have, too.

Series Finale:
Episode #21 — The Big Dance
When his students seem reluctant to attend a holiday dance, Gabe looks for ways to boost their confidence, until he realizes the real issue behind their reluctance.
First aired: December 8, 2020.


What do you think? Do you like the Mr. Iglesias TV series? Should this Netflix TV show have been cancelled or renewed for a third season?

So many good shows being cancelled. At the very least though they could give these shows an opportunity to to conclude. Really disappointing with The Crew that only got 1 season to prove itself.

Show is cute! My only issue is how Abbey (from SD) is made to look like a “bumpkin”!