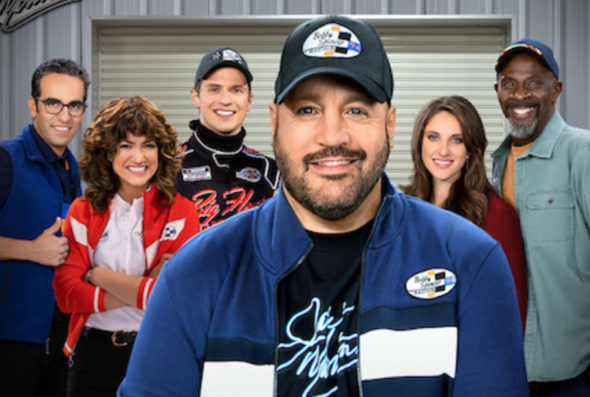 The race is over for Kevin and his garage team. Netflix has cancelled The Crew so, there won’t be a second season for this multi-camera comedy series.

Created by showrunner Jeff Lowell and directed by Andy Fickman, The Crew stars Kevin James, Jillian Mueller, Freddie Stroma, Gary Anthony Williams, Dan Ahdoot, and Sarah Stiles. In the comedy, crew chief Kevin Gibson (James) runs a NASCAR garage. When the owner steps down and passes the team off to his Stanford-educated daughter, Catherine Spencer (Mueller), Kevin finds himself at odds with the tech-reliant millennials she starts bringing in to modernize the team.

The series launched in February of this year with 10 half-hour episodes. There won’t be a second season for The Crew but Netflix has reportedly made a deal with James to develop a single-camera comedy series that he will star in and produce.

Should not have cancelled the Crew. The last episode did not even conclude anything.

I love this show and so does my family. Writing, acting is hysterical. Please reconsider!! It’s a great show!

I never even heard of this show until I stumbled across it. I watched the first episode and I was hooked. This is a great show, and very funny. I can’t believe they keep crappy shows and cancel this one. All it needed was more promotion. Shows just how little the Netflix execs know.

With all the woke dross Netflix put out they cancel this,absolutely incredible.

I really enjoyed the show. I think they could have built a great series.

I knew this show was doomed when the secretary left

Should keep the crew together

No wonder netflix is loosing so much money. They cancel every good show they have.

We loved The Crew! It was a nice change from the worn out reality shows that are constantly on! Bring back The Crew for Season 2

So sad this show was cancelled. The characters were great and it was just a good, clean show that the whole family could enjoy. Bad call Netflix.

Nah, not really a big miss. I love Kevin James and almost anything he makes, but The Crew was a very mediocre show.
5/10 but nothing thats going to ruin my day, not being able to see another season of it.

Finally a Netflix series I really enjoyed and they cancel it. The Crew is great and I can’t believe they dropped it