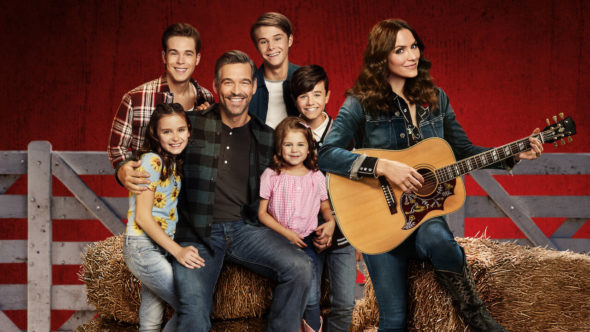 Bailey’s music career has been cut short again. Netflix has cancelled Country Comfort so, there won’t be a second season of this multi-camera comedy series.

Created by Caryn Lucas, Country Comfort stars Katharine McPhee, Eddie Cibrian, Ricardo Hurtado, Jamie Martin Mann, Pyper Braun, Shiloh Verrico, and Griffin McIntyre, with Eric Balfour and Janet Varney in recurring roles. When her career and personal life get derailed, an aspiring young country singer named Bailey (McPhee) takes a job as a nanny for a rugged cowboy named Beau (Cibrian) and his five children. With a never-give up attitude and loads of Southern charm, the newbie-nanny is able to navigate the family dynamics and be the mother figure they’ve been missing. To her surprise, Bailey also gets the band she’s been missing in this musically talented family who help get her back on the road to stardom.

The series launched in March of this year with a first season of 10 half-hour episodes. There won’t be any more. The streaming service has also dropped comedies Bonding, The Crew, and Mr. Iglesias.

Never fails. Everytime there is a great show on with a positive message, it gets cancelled, because it doesn’t appeal to a certain demographic. If it has sex, booze, foul language, then it gets rave reviews. Typical ********.

We just found Country Comfort and we loved it. Why did Netflix cancel such a great, funny, Family show.
So Sad

I really loved Country Comfort…please rethink season 2. You keep some really unsavory stuff and finally something wholesome and good comes along and you shut it down. Shame on you!!!

Loved this show. So disappointed it won’t continue!

This is such a great show and has great values that a lot of people need to learn from. Very sad this show was cancelled. I really hope they rethink their decision.

I really wish season 2 would happen of country comfort. I would love to know what happens next.

I just finished binge watching the 10th episode of Country Comfort. I was heartbroken when I learned there wasn’t going to be any more series. Please, please, please bring this wonderfully heartwarming show back. We need more shows like this one that cause a person have so many different emotions while watching it. Loved, loved, loved it!!

I really enjoyed this show. I found it by accident. I’ve watched all 10 episodes 3 times straight through. I loved the kids!!!! Katharine McPhee and Eddie Cibrian are great in their roles. I would watch Season 2 or 3 for that matter. Give this show a second chance!!!! The kids were awesome!!!!

Again , Netflix, why did u cancel Country Comfort?????

This show was very interesting. I actually enjoyed it. Country Comfort deserve s another season.

Of course they would cancel the good, clean, family show I enjoy watching with my grand babies. We loved this sweet show. I’m sick.

I really enjoyed this show! Country Comfort was so funny and had terrific music! I came across it by accident but then binge-watched every episode!
I can’t believe it’s cancelled!