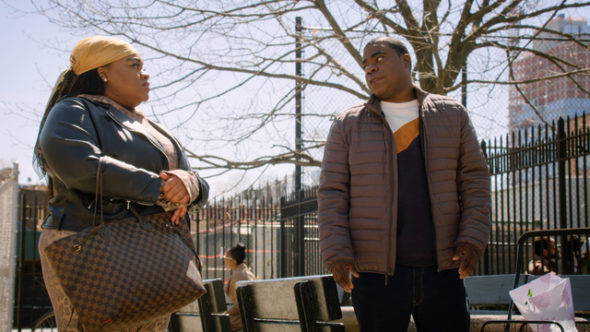 How has Tray changed in the fourth season of The Last OG TV show on TBS? As we all know, the Nielsen ratings typically play a big role in determining whether a TV show like The Last OG is cancelled or renewed for season five. Unfortunately, most of us do not live in Nielsen households. Because many viewers feel frustrated when their viewing habits and opinions aren’t considered, we invite you to rate all of the fourth season episodes of The Last OG here.  *Status Update Below.

A TBS comedy series, The Last OG stars Tracy Morgan, Ryan Gaul, Taylor Mosby, Dante Hoagland, Anna Maria Horsford, and Da’Vine Joy Randolph. Guest stars this season include Janet Hubert, Malik Yoba, Wood Harris, and Gary Dourdan. The comedy centers on Tray (Morgan), who is released from prison after 15 years. Back in a now-gentrified Brooklyn, he finds his old love, Shay (Haddish), has married a white guy. What’s worse — she and Josh (Gaul) are raising the teenaged twins (Mosby and Hoagland), Tray never even knew about. In the fourth season, Tray recovers from a violent attack and has a personal reawakening with a fresh perspective on his community, new goals, and a distinct set of challenges. It’s a new day and a new way for Tray, as he tries to adapt to a changing world so he can do some good for the Brooklyn he loves.

What do you think? Which season four episodes of The Last OG TV series do you rate as wonderful, terrible, or somewhere between? Do you think that The Last OG should be cancelled or renewed for a fifth season on TBS? Don’t forget to vote, and share your thoughts, below.