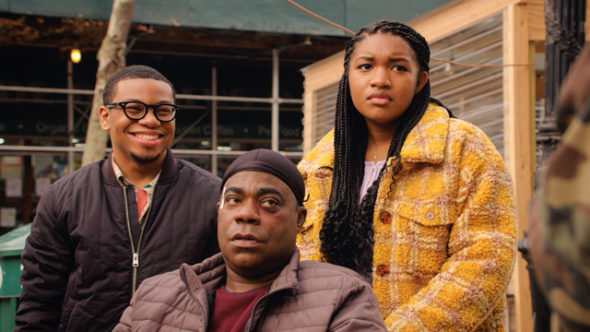 What’s ahead for Tray? Has The Last OG TV show been cancelled or renewed for a fifth season on TBS? The television vulture is watching all the latest cancellation and renewal news, so this page is the place to track the status of The Last OG, season five. Bookmark it, or subscribe for the latest updates. Remember, the television vulture is watching your shows. Are you?

Airing on the TBS cable channel, The Last OG stars Tracy Morgan, Ryan Gaul, Taylor Mosby, Dante Hoagland, Anna Maria Horsford, and Da’Vine Joy Randolph. Guest stars this season include Janet Hubert, Malik Yoba, Wood Harris, and Gary Dourdan. The comedy centers on Tray (Morgan), who is released from prison after 15 years. Back in a now-gentrified Brooklyn, he finds his old love, Shay (Haddish), has married a white guy. What’s worse — she and Josh (Gaul) are raising the teenaged twins (Mosby and Hoagland), which Tray never even knew about. In the fourth season, Tray recovers from a violent attack and has a personal reawakening with a fresh perspective on his community, new goals, and a distinct set of challenges. It’s a new day and a new way for Tray, as he tries to adapt to a changing world so he can do some good for the Brooklyn he loves.

The fourth season of The Last OG averaged a 0.14 rating in the 18-49 demographic and 496,000 viewers. Compared to season three, that’s down by 43% in the demo and down by 32% in viewership in the live+same day ratings (including DVR playback through 3:00 AM). While these numbers don’t include further delayed or streaming viewing, they are a very good indicator of how a show is performing, especially when compared to others on the same channel. There can be other economic factors involved in a show’s fate, but typically the higher-rated series are renewed and the lower-rated ones are cancelled. Find out how The Last OG stacks up against other TBS TV shows.

Will TBS cancel or renew The Last OG for season five? This cable channel doesn’t have many original scripted series and this one has typically been one of TBS’ top performers. The ratings are way down in year four but, I suspect that as long as Morgan wants to make another year, I think The Last OG will be renewed. I’ll update this page with breaking developments. Subscribe for free alerts on The Last OG cancellation or renewal news.

4/28/22 update: The Last OG has been cancelled by TBS so there won’t be a fifth season.

What do you think? Were you hoping that The Last OG TV show would be renewed for a fifth season? Are you sorry that TBS cancelled this TV series, instead?

Cute but the show had to go.