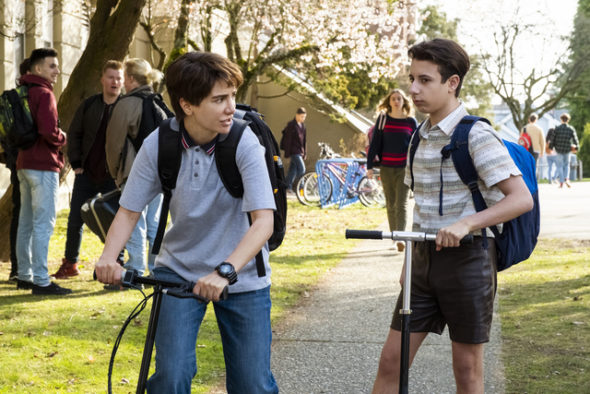 Will this kid graduate to year two? Has the Chad TV show been cancelled or renewed for a second season on TBS? The television vulture is watching all the latest cancellation and renewal news, so this page is the place to track the status of Chad, season two. Bookmark it, or subscribe for the latest updates. Remember, the television vulture is watching your shows. Are you?

Airing on the TBS cable channel, the Chad TV show is created by writer/executive producer and showrunner Nasim Pedrad. The Iranian-American actress also stars in the title role. Co-stars include Ella Mika, Saba Homayoon, Paul Chahidi, Jake Ryan, and Alexa Loo. The story follows a 14-year-old pubescent Persian boy named Chad (Pedrad) as he navigates his first year of high school. His mission, like many high schoolers, is to become popular. Chad’s friendships and sanity are pushed to the limits as he uses every tactic at his disposal to befriend the cool kids, while enduring the new dating life of his mother, Naz (Homayoon), and reconciling with his cultural identity.

The first season of Chad averages a 0.18 rating in the 18-49 demographic and 583,000 viewers. Find out how Chad stacks up against other TBS TV shows.

Will TBS cancel or renew Chad for season two? The cable channel has very few original scripted series and this show has been been awarded tax incentives to produce season two in California (if it’s renewed). Though the ratings aren’t very high, I suspect that Chad will likely be renewed for a second year. I’ll update this page with breaking developments. Subscribe for free alerts on Chad cancellation or renewal news.

What do you think? Are you glad that the Chad TV show has been renewed for a second season? How would you feel if TBS had cancelled this TV series, instead?

Can’t wait for season 2..NOWADAYS ITS RIDICULOUS HOW SENSITIVE PEOPLE ARE. CHAD IS HILARIOUS. FUN FOR THE WHOLE FAMILY..WE GAVE CHAD NIGHT..

I finally have a show I hate more then FX’s “Testees”. “Chad” is my new all time worst television show ever. She’s never funny on snl, or in real life. . .

The fact that She plays a young boy has nothing to do with how absolutely unfunny this trash is. It’s like a show starring “Flow” from progressive. An extended Progressive Commercial with Flow is exactly what this piece of crap show is. . .so unfunny it causes anger and hatred instead of peace and love. Please lie to us and say it’s just been cancelled so we all feel better. Although, we will still pray for it’s non existence in our Universe.

This is a stupid show why is this on tv?please stop showing that program I can’t stand the commercials. I wouldn’t waste my time watching that crap. You would think I would complain about another program,but chad is the worse one out there. I cannot even watch the commercials for it.It sickens me physically.

I wish it was cancelled. Horrible, stupid show. I can’t believe you want it on your network.

Best show on tv. The Chad character makes me laugh so hard I can’t breathe.

Im Sorry But Yes I did watch AN Episode of CHAD And Im A Big Comedys Movies T.v Buff Anyway Im SORRY BUT I THINK ITS A VERY NOT TOO GOOD SHOW. I think if anytging it would have been A Way Better idea And Show if she was playing a teenage girl that was kinda nerdy and trying too fit in with the popular girls ect.

CRAP LIKE TBS’s Chad is the REASON We’ll be cancelling our XFINITY SERVICE.

Please cancel this show!!!! I need to stop seeing these stupid commercials!!!

Wow pretty close to what I said. But I went a bit further.You are correct.

This show has been called cringe worthy…all i can do is cringe and i find nothing funny about it. Chad is weird looking, probably because a 30+ woman is playing him. It’s trying to hard to be or do something…haven’t figured out what and I don’t care. please don’t renew…

Yes I FULLY AGREE WITH U