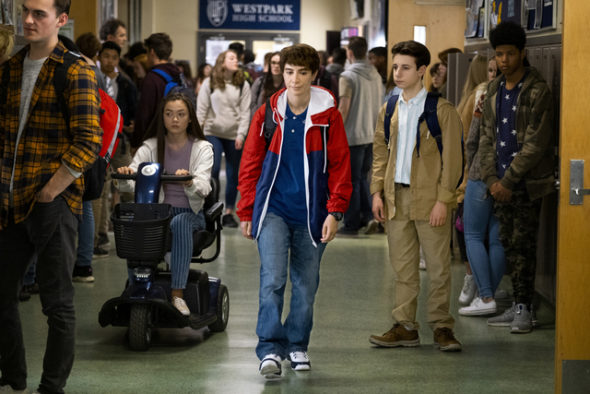 Nasim Pedrad spent five seasons on the Saturday Night Live TV series as a writer and performer and has now created her own show, Chad, for TBS. Will this new comedy last five years or more? Will Chad be cancelled or renewed for season two? Stay tuned.  *Status Update Below.

A single-camera comedy series, the Chad TV show is created by writer/executive producer and showrunner Pedrad. The Iranian-American actress also stars in the title role. Co-star are Ella Mika, Saba Homayoon, Paul Chahidi, Jake Ryan, and Alexa Loo. The story follows a 14-year-old pubescent Persian boy named Chad (Pedrad) as he navigates his first year of high school. His mission, like many high schoolers, is to become popular. Chad’s friendships and sanity are pushed to the limits as he uses every tactic at his disposal to befriend the cool kids, while enduring the new dating life of his mother, Naz (Homayoon), and reconciling with his cultural identity.

What do you think? Do you like the Chad TV series on TBS? Should it be cancelled or renewed for a second season?

These ratings are suspect. There has never been a TV show that tanked so hard, yet rebounded so strongly without a major cast change. I definitely smell what the Rock is cookin’!

The character of Chad, rather the person prtraying Chad, is not believable as a boy. The movements, mannerisms, even vocal tone do not represent any boy/male I’ve known, seen, or heard.
Content of episodes are ok…just title character doesn’t pull it off

I wish people would stop with the cringe word. The shows is creepy and a middle aged woman playing a 14 year old boy doesn’t work.

weird. Cracks me up. The train wreck you can’t turn away from.