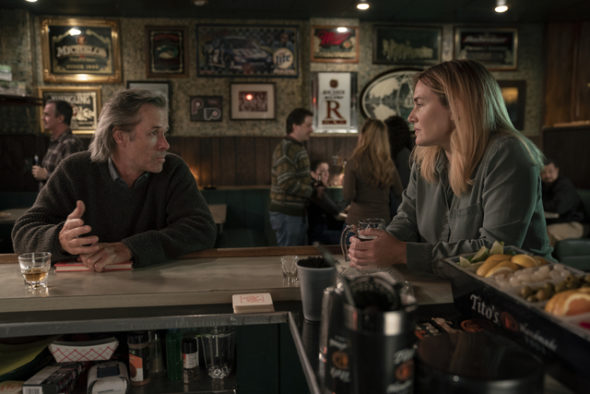 This HBO series appears to be a true mini-series with a set beginning, middle, and end. However, if there’s enough interest, could the show be renewed for a second season anyway, ala Big Little Lies? Will Mare of Easttown be back for more? Stay tuned. *Status update below.

Created by Brad Ingelsby, the Mare of Easttown TV series stars Kate Winslet, Julianne Nicholson, Jean Smart, Angourie Rice, Evan Peters, Guy Pearce, Cailee Spaeny, David Denman, John Douglas Thompson, Patrick Murney, James McArdle, Sosie Bacon, Joe Tippett, and Neal Huff. In the story, Mare Sheehan (Winslet) is a small-town Pennsylvania detective with 20 years of experience and a jaded demeanor. She investigates a local murder while trying to keep her own life from falling apart. Mare finds herself paired up with a young hotshot detective — Colin Zabel (Peters) — sent by the county to assist on the case. Mare is still feeling the repercussions of her broken marriage which followed her son’s suicide. She’s trying to raise her grandson with the help of her own mother, Helen (Smart). Mare also tries to convince her daughter, Siobhan (Rice), to chase her dreams so she can get out of Easttown one day. Meanwhile, Mare’s ex-husband, Frank (Denman), has bought the house behind her home (in an attempt to have a friendly divorce) and is now engaged to his new girlfriend.

What do you think? Do you like the Mare of Easttown TV series on HBO? Should it be renewed for a second season?

I love Mare of Easttown. I certainly hope it is renewed for a second season. It’s the best series I have seen in a long time.

Awesome show I would love to see it renewed for a second season!

The series should be renewed for a second season, I didn’t think, I would like it but, I really love it.