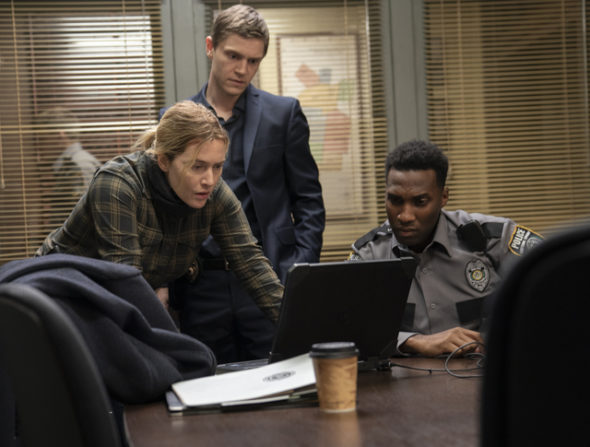 Can Mare solve the case and her own problems in the first season of the Mare of Easttown TV show on HBO? As we all know, the Nielsen ratings typically play a big role in determining whether a TV show like Mare of Easttown is cancelled or renewed for season two (this one seems to be a mini-series). Unfortunately, most of us do not live in Nielsen households. Because many viewers feel frustrated when their viewing habits and opinions aren’t considered, we invite you to rate all of the first season episodes of Mare of Easttown here. *Status update below.

An HBO crime drama series, the Mare of Easttown TV series stars Kate Winslet, Julianne Nicholson, Jean Smart, Angourie Rice, Evan Peters, Guy Pearce, Cailee Spaeny, David Denman, John Douglas Thompson, Patrick Murney, James McArdle, Sosie Bacon, Joe Tippett, and Neal Huff. In the story, Mare Sheehan (Winslet) is a small-town Pennsylvania detective with 20 years of experience and a jaded demeanor. She investigates a local murder while trying to keep her own life from falling apart. Mare finds herself paired up with a young hotshot detective — Colin Zabel (Peters) — sent by the county to assist on the case. Mare is still feeling the repercussions of her broken marriage which followed her son’s suicide. She’s trying to raise her grandson with the help of her own mother, Helen (Smart). Mare also tries to convince her daughter, Siobhan (Rice), to chase her dreams so she can get out of Easttown one day. Meanwhile, Mare’s ex-husband, Frank (Denman), has bought the house behind her home (in an attempt to have a friendly divorce) and is now engaged to his new girlfriend.

What do you think? Which season one episodes of the Mare of Easttown TV series do you rate as wonderful, terrible, or somewhere between? Do you think that Mare of Easttown should be renewed for a second season on HBO? Don’t forget to vote, and share your thoughts, below.

This show was TOP NOTCH AMAZING 10 STARS!!!!! PLEASE do a 2nd season on this. Kate Winslet was totally impressive as Mare!

Please bring back Northern Exposure – it is a classic!!!

Episode 3 has been the best so far. Liked Evan Peters offering some humor in relationship. Intriguing questions raised. So, Faye has a son and he has an attractive girlfriend (looks like Julia Roberts). Perhaps, Frank’s new girlfriends son knew the victim. Many questions beside the obvious so very cool!!! Live episode 3, development of all characters and new members connected to family of Frank, Faye.

I enjoyed the show,will be watching the entire series.It has me hooked! Always enjoy Kate Winslet.

I loved this first episode and hope it continues on the same high level performance and story. Acting is spot on, story has me hooked. I know places and people like this. These characters are a window to learn what motivates people to keep pushing forward despite hardships. Anytime I get a chance to watch something that isn’t a display of T&A, or a game show, competition or “reality” POS I’m in full support.