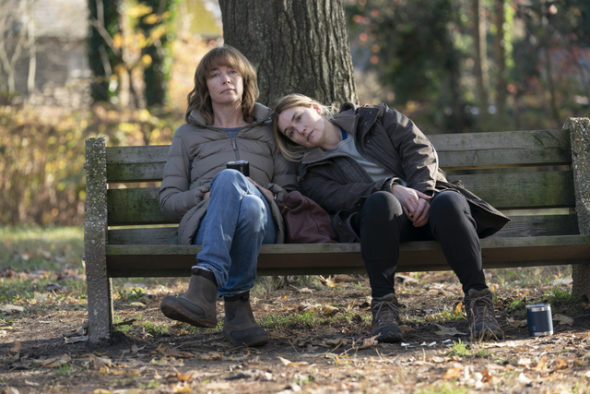 Is there more than one story to tell? Has the Mare of Easttown TV show been cancelled? Renewed for a second season on HBO? The television vulture is watching all the latest cancellation and renewal news, so this page is the place to track the status of Mare of Easttown, season two. Bookmark it, or subscribe for the latest updates. Remember, the television vulture is watching your shows. Are you?

Airing on the HBO cable channel, the Mare of Easttown TV series stars Kate Winslet, Julianne Nicholson, Jean Smart, Angourie Rice, Evan Peters, Guy Pearce, Cailee Spaeny, David Denman, John Douglas Thompson, Patrick Murney, James McArdle, Sosie Bacon, Joe Tippett, and Neal Huff. In the story, Mare Sheehan (Winslet) is a small-town Pennsylvania detective with 20 years of experience and a jaded demeanor. She investigates a local murder while trying to keep her own life from falling apart. Mare finds herself paired up with a young hotshot detective — Colin Zabel (Peters) — sent by the county to assist on the case. Mare is still feeling the repercussions of her broken marriage which followed her son’s suicide. She’s trying to raise her grandson with the help of her own mother, Helen (Smart). Mare also tries to convince her daughter, Siobhan (Rice), to chase her dreams so she can get out of Easttown one day. Meanwhile, Mare’s ex-husband, Frank (Denman), has bought the house behind her home (in an attempt to have a friendly divorce) and is now engaged to his new girlfriend.

Will HBO cancel or renew Mare of Easttown for season two? This show appears to be a true mini-series with a set beginning, middle, and end. Still, if the series is popular enough, it could be renewed for a second year, ala Big Little Lies. I’ll update this page with breaking developments. Subscribe for free alerts on Mare of Easttown cancellation or renewal news.

What do you think? Do you hope that the Mare of Easttown TV show will return someday for a second season on HBO?

Great series! I hope there is a season 2!

Mare is so addicting. Please bring her back

Yes please we definitely want and need a 2nd season!!!! This show is amazing I have been waiting for something like this and now that I found it ,and it’s amazing we are talking like there will be no 2nd season!!! I hope you will renew PLEASE !!