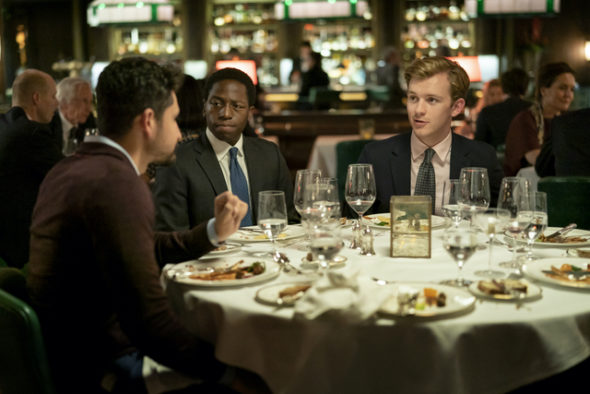 HBO has introduced a new drama series called Industry to its Monday night schedule. Monday night shows typically draw less interest than the channel’s Sunday night programming and many aren’t renewed. How will this one perform? Will Industry be cancelled or renewed for season two? Stay tuned. *Status Update Below.

A British drama series that’s a co-production with BBC Two, the Industry TV show stars Myha’la Herrold, Marisa Abela, Harry Lawtey, David Jonsson, Nabhaan Rizwan, Freya Mavor, Will Tudor, Conor MacNeill, and Ken Leung. The story revolves around a group of young graduates who are competing for a limited number of permanent positions at a prestigious London investment bank. The five young graduates hoping to work at Pierpoint & Co. are hungry American outsider Harper Stern (Herrold), party-boy Robert Spearing (Lawtey), privileged Yasmin Kara-Hanani (Abela), Hari Dhar (NRizwan), and Augustus ‘Gus’ Sackey (Jonsson), a graduate of Eton and Oxford. As members of the group rise and fall, they must decide if life is as simple as the bottom line.

What do you think? Do you like the Industry TV series on HBO and BBC Two? Should it be cancelled or renewed for a second season?

2nd best show this year on HBO behind The Undoing. NEEEEED a season 2

Enjoying Season 1 of Industry and hope it is renewed.