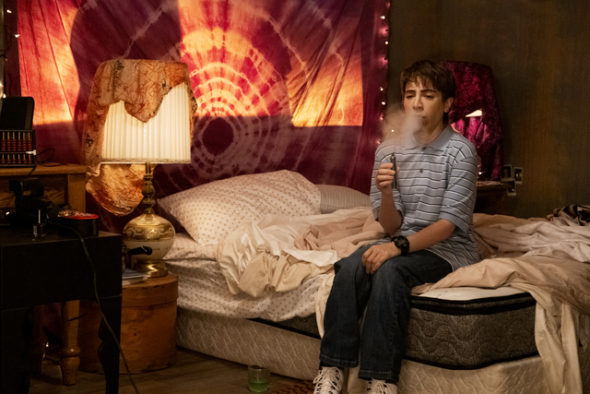 Can this new kid become popular in the first season of the Chad TV show on TBS? As we all know, the Nielsen ratings typically play a big role in determining whether a TV show like Chad is cancelled or renewed for season two. Unfortunately, most of us do not live in Nielsen households. Because many viewers feel frustrated when their viewing habits and opinions aren’t considered, we invite you to rate all of the first season episodes of Chad here.   *Status Update Below.

A TBS single-camera comedy, the Chad TV show is created by writer/executive producer and showrunner Nasim Pedrad. The Iranian-American actress also stars in the title role. Co-starring are Ella Mika, Saba Homayoon, Paul Chahidi, Jake Ryan, and Alexa Loo. The story follows a 14-year-old pubescent Persian boy named Chad (Pedrad) as he navigates his first year of high school. His mission, like many high schoolers, is to become popular. Chad’s friendships and sanity are pushed to the limits as he uses every tactic at his disposal to befriend the cool kids, while enduring the new dating life of his mother (Homayoon) and reconciling with his cultural identity.

What do you think? Which season one episodes of the Chad TV series do you rate as wonderful, terrible, or somewhere between? Do you think that Chad should be cancelled or renewed for a second season on TBS? Don’t forget to vote, and share your thoughts, below.

So many people didn’t give this show a chance. It got so much better towards the last few shows. People forget so many famous shows that lasted years had horrible reviews for 1st & 2nd seasons & some people just didn’t get it, good shows can take time as this showed proved. If I can go from not liking it at the beginning to loving it by season 7 it has to be good. I bet some gave up at the beginning, I’m glad I didn’t. Nasim great job!!!!!

When Chad aired I wasn’t crazy about it, He did what he wanted with no repercussions & it got old but something kept drawing me in and it got better by season 6, finally it started to change & by season 7 I loved it, it was not only a good show but it was nice that Reed put him in his place instead of him getting away with everything, Loved season finale, Denise calling him out was great. then I got hooked and can’t wait to see season 2 so please don’t cancel it finally got great and I… Read more »

Yikes.
Who thought a middle aged woman could play a teenage boy and make it funny or relatable in any way?
Dumb concept, bad acting, atrocious writing.
This was a waste of my time.