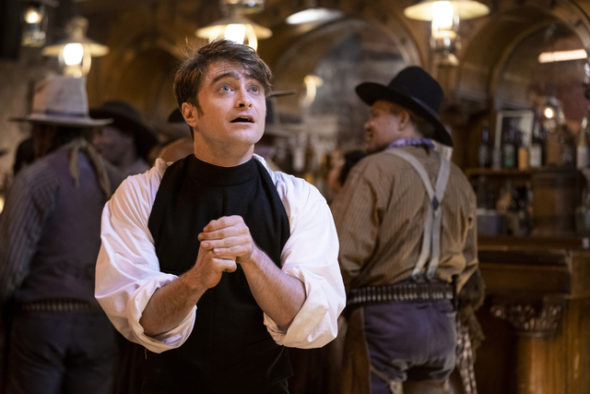 How wild is the Old West in the third season of the Miracle Workers TV show on TBS? As we all know, the Nielsen ratings typically play a big role in determining whether a series like Miracle Workers is cancelled or renewed for season four. Unfortunately, most of us do not live in Nielsen households. Because many viewers feel frustrated when their viewing habits and opinions aren’t considered, we invite you to rate all of the third season episodes of Miracle Workers here. *Status Update Below.

A TBS comedy anthology series, the Miracle Workers stars Daniel Radcliffe, Steve Buscemi, Geraldine Viswanathan, Karan Soni, and Jon Bass. Subtitled Oregon Trail, season three is set in the American Old West of 1844. The story follows idealistic small-town preacher Ezekiel Brown (Radcliffe) who teams up with a wanted outlaw named Benny (Buscemi) and an adventurous prairie wife, Prudence Aberdeen (Viswanathan). Together, they lead a wagon train west on the Oregon Trail across an American landscape. It’s can be fraught with both promise and peril.

What do you think? Which season three episodes of the Miracle Workers TV series do you rate as wonderful, terrible, or somewhere between? Do you think that Miracle Workers should be cancelled or renewed for a fourth season on TBS? Don’t forget to vote, and share your thoughts, below.

This show is really great! We’ve had a ball watching the series. Our votes are positive and we hope it continues.

it’s hard to judge by watching just one episode. I liked last season very much so hopefully this one will be as good or better.