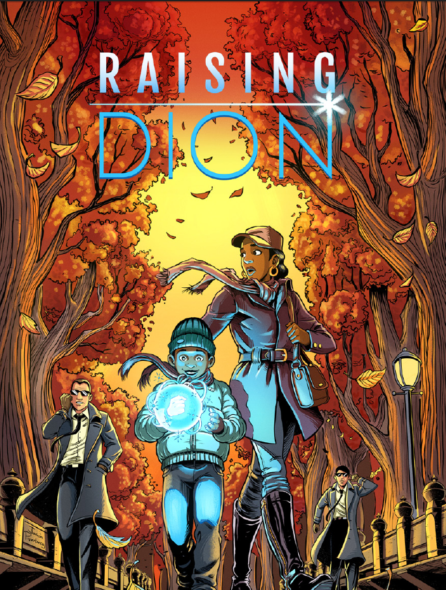 Netflix has ordered the Raising Dion TV show to series. The superhero saga focuses on a single mother and who is raising her young son, who happens to be a superhero with ever-changing powers. Like parenthood isn’t tough enough…. The series is based on Dennis Liu’s comic book and a short film of the same name. Watch it, below.

Check out this Netflix press release, to learn more.

A Single Mom raises her Superhero Son in the groundbreaking RAISING DION, coming to Netflix

— MACRO and Michael B. Jordan, through his Outlier Society Productions, will Executive Produce —

Hollywood, CA – October 5, 2017 — Netflix, the world’s leading Internet entertainment service, has ordered a 10-episode season of the one-hour sci-fi, family drama, Raising Dion, based on a short film about an African-American single mother who discovers her young son has multiple, constantly changing abilities.

Raising Dion is the brainchild of commercial and music video director Dennis Liu, who created the comic book and directed the short film, which became a viral sensation. Carol Barbee, who most recently served as executive producer on the popular and acclaimed series UnREAL and whose credits also include Judging Amy, Jericho, and Touch, will serve as showrunner/executive producer and wrote the script for episode one, which Liu will direct. Joining her and Liu as executive producers are Michael B. Jordan, through his Outlier Society Productions, who will also appear in the series; MACRO’s Charles D. King, Kim Roth and Poppy Hanks; Kenny Goodman; and Michael Green (Logan, American Gods). Raising Dion is a Netflix production.

The series follows the story of a woman named Nicole Reese, who raises her son Dion after the death of her husband Mark (Jordan). The normal dramas of raising a son as a single mom are amplified when Dion starts to manifest several magical, superhero-like abilities. Nicole must now keep her son’s gifts secret with the help of Mark’s best friend Pat, and protect Dion from antagonists out to exploit him while figuring out the origin of his abilities. The ten-episode series will premiere on Netflix in more than 190 countries around the world.

Said Liu, “I started this project many years ago because I wanted to see more diverse representation on film and television and I’m excited to partner with Netflix and MACRO, who I know shares that commitment. More than ever, we need more stories told from different points of view and my hope with Raising Dion is to create a cinematic experience for all families that will lift your spirits and make you laugh and cry.”

“We haven’t seen this type of superhero story before — an origin myth full of imagination, wonder and adventure, all grounded in the experiences of a modern single mother,” said Cindy Holland, Vice President, Original Content for Netflix. “Michael B. Jordan is an exciting and dynamic talent, and I’m excited to see him, MACRO, Carol and the team translate Dennis’ unique vision to television.”

Netflix is the world’s leading internet entertainment service with 104 million members in over 190 countries enjoying more than 125 million hours of TV shows and movies per day, including original series, documentaries and feature films. Members can watch as much as they want, anytime, anywhere, on nearly any internet-connected screen. Members can play, pause and resume watching, all without commercials or commitments.

What do you think? Have you read the comic or watched the film? Do you plan to check out the Raising Dion TV series when it drops to Netflix? Sound off, in the comments.