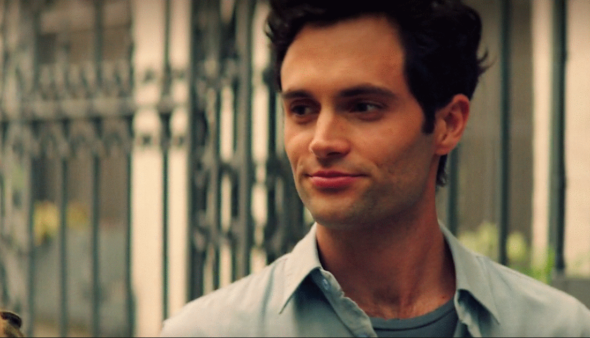 Will Joe Goldberg’s past catch up with him in the second season of the You TV show on Netflix? As we all know, the Nielsen ratings typically play a big role in determining whether a TV show like You is cancelled or renewed for season three. Netflix and other streaming platforms, however, collect their own data. If you’ve been watching this TV series, we’d love to know how you feel about the second season episodes of You here. *Status update below.

A Netflix psychological thriller, You stars Penn Badgley, Victoria Pedretti, Jenna Ortega, Janes Scully, Ambyr Childers, and Carmela Zumbado. Based on the Caroline Kepnes novel of the same name, the drama centers on NYC bookstore manager Joe Goldberg (Badgley) who became infatuated with aspiring writer and grad student Guinevere Beck (Elizabeth Lail). Season two finds Goldberg on the run from the horrors of his past. He settles in Los Angeles and falls for Love Quinn (Pedretti), an aspiring chef and health guru. Can Goldberg truly escape his past or will history repeat itself?

What do you think? Which season two episodes of the You TV series do you rate as wonderful, terrible, or somewhere between? Do you think that You on Netflix should be cancelled or renewed for a third season? Don’t forget to vote, and share your thoughts, below.

*1/14/20 update: Netflix has renewed the You TV series for a third season.

OMGEEE! I truly hope they renew “You” for a 3rd season!!!!
I cannot stop thinking about what will happen next!!! Plus, who is “Joe/Will” peeking through the fence at????
How is the baby going to play out in all of this????? I have to know!!!