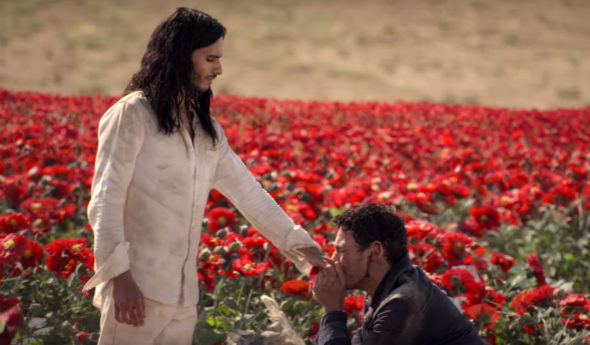 Is the mystery solved in the first season of the Messiah TV show on Netflix? As we all know, the Nielsen ratings typically play a big role in determining whether a TV show like Messiah is cancelled or renewed for season two. Netflix and other streaming platforms, however, collect their own data. If you’ve been watching this TV series, we’d love to know how you feel about the first season episodes of Messiah here. *Status update below.

A Netflix suspense thriller TV series, Messiah stars Mehdi Dehbi, Tomer Sisley, Michelle Monaghan, John Ortiz, Melinda Page Hamilton, Stefania LaVie Owen, Jane Adams, Sayyid El Alami, Fares Landoulsi, and Wil Traval. The show chronicles the modern world’s reaction to a man who first appears in the Middle East. Al-Massih (Dehbi) creates a groundswell of international followers around him when he claims to be the eschatological return of ‘Isa (Jesus). Has he been sent by God or, is he a dangerous fraud who’s bent on dismantling the world’s geopolitical order?

What do you think? Which season one episodes of the Messiah TV series do you rate as wonderful, terrible, or somewhere between? Do you think that Messiah on Netflix should be cancelled or renewed for a second season? Don’t forget to vote, and share your thoughts, below.

I strongly suspect the series was not renewed because it was very critical of the Israelis, from the standpoint of the Palestinian occupation, the use of brutality/torture against detainees including children), and kidnapping. The Israeli interrogator was clearly a sadistic individual. Powerful Israelis and Israeli sympathizers killed the series, in my opinion.

Bring it back.. BRING IT BACK. Season 2 or Netflix will go.