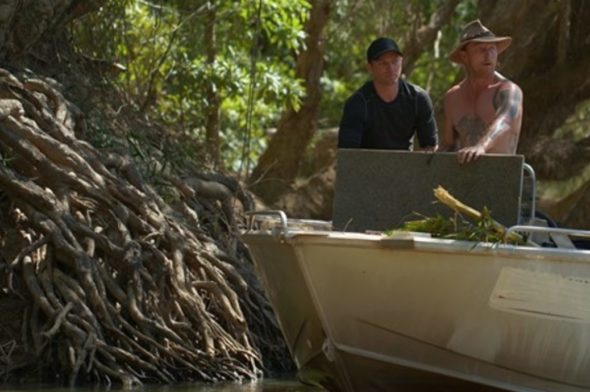 Legends of the Wild is coming soon to Discovery Channel, and the network is revealing more about the new animal series, which focuses on the apex predators of the world. The new series arrives next week.

Discovery Channel revealed the following about the docu-series in a press release:

“Across the planet, there are startling reports about strange animal attacks against humans, new apex predators changing the natural order, and sightings of mysterious creatures that nobody can explain. Now, two lifelong friends and wilderness experts, Damian Duffy and Matt Hoffmann will use their combined skills in an attempt to document, discover and solve the most extraordinary mysteries of the natural world. The brand-new series, LEGENDS OF THE WILD premieres Wednesday, April 1st at 10PM ET/PT on Discovery Channel.

Damian Duffy, a former Australian army paratrooper and certified wilderness guide, and Matt Hoffmann, a professional wildlife photographer and storm chaser, are two adventurers who aren’t afraid of dangerous situations. With an unparalleled passion for wildlife, they’ve dedicated their entire lives and careers to taking on and capturing Mother Nature and its many wonders. Together they journey deep into the wild – risking it all – to explore some of the world’s most hair-raising wildlife legends.

In the series premiere, Damian and Matt head to Brazil to investigate why Brazilian ranchers are turning up dead, gored by an unknown creature. There’s a wide range of animal suspects from jaguars to caimans, but could the killer be something no one suspected? From investigating the possible return of a long extinct deadly creature in Australia, to trying to solve the mystery of disappearing villagers and livestock in the Philippines, Damian and Matt set off into the wild each week to find answers. Then they have to make it out alive.”