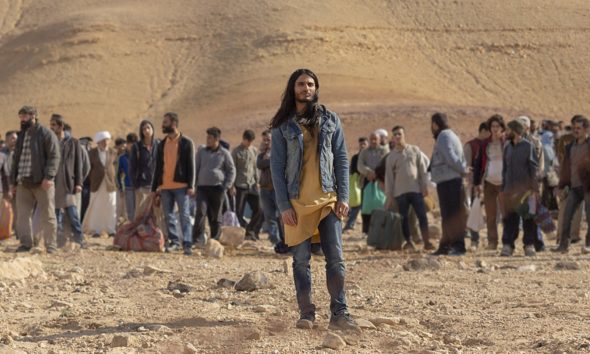 TV show description:
A suspense thriller TV series, Messiah was created by Michael Petroni. The show chronicles the modern world’s reaction to a man who first appears in the Middle East. Al-Massih (Dehbi) creates a groundswell of international followers around him when he claims to be the eschatological return of ‘Isa (Jesus). Has he been sent by God or, is he a dangerous fraud who’s bent on dismantling the world’s geopolitical order?

The story unfolds from multiple points of view, including those of Eve Geller (Monaghan), a young CIA agent; an Israeli Shin Bet officer named Avrim Dahan (Sisley); Latino preacher Felix Iguero (Ortiz) and his Texan daughter, Rebecca (Owen); a refugee named Samir (Landoulsi); and the media, among others.

What do you think? Do you like the Messiah TV show? Do you think it should have been cancelled or renewed for a second season?

This series is the best I’ve probably ever seen. The story line is rich, realistic, profound, fascinating and so timely. The acting is terrific. My husband and I would absolutely love to see it continue as a series. We have mentioned it to friends who have also watched it and their opinions are aligned with ours. Why wouldn’t this gem be continued? There is so much garbage t.v. not worth wasting one’s time on. We are very disappointed. Please reconsider and carry this series forward!!

No! I wish it was NOT canceled!! It was one of the best series on Netflix!

So i wasted my time watching this show, if they were not going to make a 2nd series they should of ended it with a proper ending. It was a brilliant show and the the actor playing messiah was mesmerising and it ended so suddenly (i thought there was 3 more episodes for some reason) it was a real dissapointment. I gather from what ive seen netflix are not making more cos the muslims are being offended well so WHAT.

I really hope they reconsider and renew this series. I really enjoyed watching it and was excited and anxious to see the second season.

Very disappointed that they cancelled the show. We really enjoyed it and were really hoping for a second season!!! Really really disappointed.

I really liked this thought provoking show and I will be sorry to see it go. I was looking forward to more in the next episodes.

Are they kidding? Why would they do this? This show was by far better than their other crap. Loved the show as did Many others. I think Netflix is making a huge mistake. Very disappointed!

Loved this series was looking forward to the next season. Very disappointing.

Messiah became better and better ending in that cliffhanger and we were waiting for season 2 so disappointed.

Enjoyed this series because it gave me a lot to think about re current political situations in the Middle East. A different viewpoint: fictionalized and not preachy-preachy. Hope it continues into a second year with the same thoughtful/provocative storylines