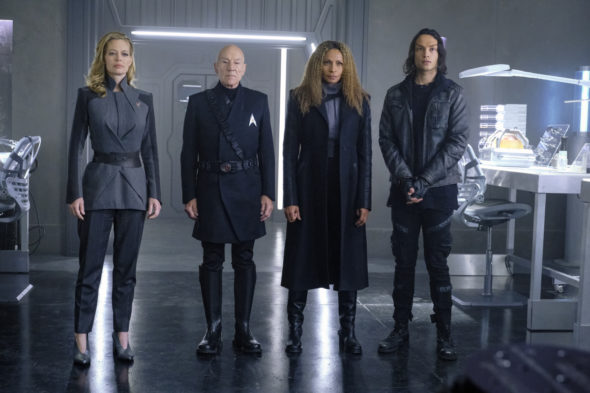 Will Picard and his crew be in time? Has the Star Trek: Picard TV show been cancelled or renewed for a third season on Paramount+? The television vulture is watching all the latest cancellation and renewal news, so this page is the place to track the status of Star Trek: Picard, season three. Bookmark it, or subscribe for the latest updates. Remember, the television vulture is watching your shows. Are you?

Streaming on the Paramount+ subscription service, the Star Trek: Picard TV show is a follow-up to Star Trek: The Next Generation. It stars Sir Patrick Stewart, Alison Pill, Jeri Ryan, Michelle Hurd, Evan Evagora, Orla Brady, Isa Briones, Santiago Cabrera, and Brent Spiner with Annie Wersching and special guest stars Whoopi Goldberg and John de Lancie. The series takes place in the latter part of the 24th Century and picks up two decades after the last time viewers saw Jean-Luc Picard (Stewart), as Starfleet Captain of the U.S.S. Enterprise. Season two takes Picard and his crew on a bold new journey — into the past. Picard must enlist friends both old and new to confront the perils of 21st century Earth in a desperate race against time to save the galaxy’s future while facing the ultimate trial from one of his greatest foes.

Unless they decide to publicize viewership, it is typically difficult to predict whether Paramount+ will cancel or renew a show. In this case, Picard is part of the Star Trek franchise which is the cornerstone of the streaming service’s offering and it’s also already been renewed for a third year. I’ll keep my ears open and an eye out for news, and will update this page with breaking developments. Subscribe for free alerts on Star Trek: Picard cancellation or renewal news.

What do you think? Are you glad that the Star Trek: Picard TV show has been renewed for a third and final season? How would you feel if Paramount+ had cancelled this TV series, instead?

LOVED the first season en so far thought the 1th epp of the second season was great. Loved Seven (the foremost reason to watch) and how her character evolved. Liked how she’s paired up with Raffi too, never understood that she supposedly ended up with Chacotay so i always ignored that. Also the Borg and Q are always interesting. So far i am really enjoying myself!!!! and am very happy that the show was renewed for a second and third season.