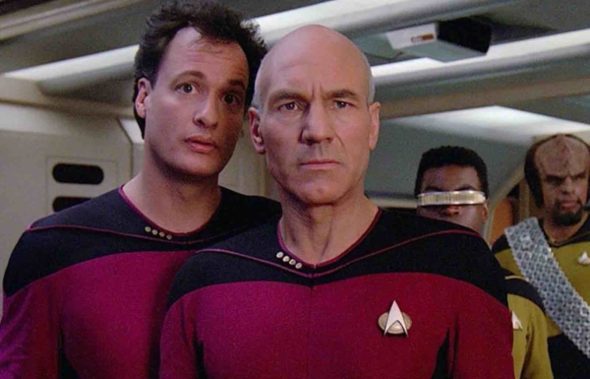 “The trial never ends…” Jean Luc Picard’s life is going to get a lot crazier. Paramount+ has released a teaser video for the upcoming second season of Star Trek: Picard and a beloved character from the Star Trek: The Next Generation series will be returning.  Series star Patrick Stewart made the reveal.

John de Lancie will be revising his role as Q in season two of Picard, which will debut at some point in 2022. As viewers of Next Generation know, the god-like character is a member of the Q-Continuum who causes all sorts of turmoil and mischief for the crew of the U.S.S. Enterprise-D. Q is well-loved by fans but appeared in just eight Next Generation episodes — including the pilot (which revolved around humanity being put on trial) and the series finale (which featured an older Picard running his family’s vineyard).

Here’s the press release from Paramount+, the teaser, and the announcement:

Production on Season Two Officially Underway, Will Premiere In 2022

April 5, 2021 – Paramount+ today revealed a first look at season two of its hit original series STAR TREK: PICARD with an all-new teaser trailer. The teaser trailer was introduced by series star Patrick Stewart at the top of today’s First Contact Day virtual global panels, which also revealed that season two will premiere in 2022. Actor John de Lancie made a surprise appearance during the panel, confirming that he will appear in season two of STAR TREK: PICARD as his iconic “Star Trek” character, Q.

The free First Contact Day virtual panels will be available to view on-demand on Paramount+’s YouTube Channel and on Paramount+ in the U.S., following their initial airing on StarTrek.com/FirstContact today from 12:00-2:45 PM, PT/3:00-5:45 PM, ET.

STAR TREK: PICARD streams exclusively on Paramount+ in the U.S. and is distributed concurrently by ViacomCBS Global Distribution Group on Amazon Prime Video in more than 200 countries and territories and in Canada, airs on Bell Media’s CTV Sci-Fi Channel and streams on Crave.

What do you think? Have you watched the first season of the Star Trek: Picard TV series? Will you be watching Q’s return in season two?

Yes!Yes!Yes! A Trekkie fan from the beginning. Great to have Q back!!