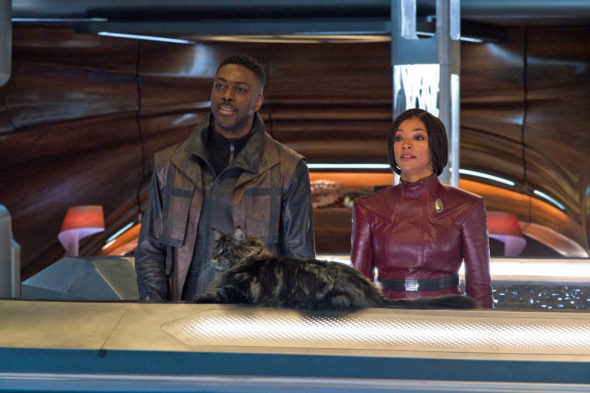 How long will this ship’s mission last? Has the Star Trek: Discovery TV show been cancelled or renewed for a fifth season on Paramount+? The television vulture is watching all the latest cancellation and renewal news, so this page is the place to track the status of Star Trek: Discovery, season five. Bookmark it, or subscribe for the latest updates. Remember, the television vulture is watching your shows. Are you?

Streaming on the Paramount+ subscription service, the Star Trek: Discovery TV show stars Sonequa Martin-Green, Doug Jones, Anthony Rapp, Mary Wiseman, Wilson Cruz, David Ajala, and Blu del Barrio. A prequel to the original Star Trek series, this drama follows the crew of the USS Discovery of the interstellar government known as the United Federation of Planets (UFP). Season four finds Captain Burnham (Martin-Green) and her crew facing a threat unlike any they’ve ever encountered. With Federation and non-Federation worlds alike feeling the impact, they must confront the unknown and work together to ensure a hopeful future for all.

Unless they decide to publicize viewership, it is difficult to predict whether Paramount+ will cancel or renew Star Trek: Discovery for season five. That being said, the Trek franchise is the cornerstone of this streaming service’s original content so I would be surprised if Discovery didn’t reach at least five seasons. I’ll keep my ears open and an eye out for news, and will update this page with breaking developments. Subscribe for free alerts on Star Trek: Discovery cancellation or renewal news.

What do you think? Are you glad the Star Trek: Discovery TV show has been renewed for a fifth season? How would you feel if Paramount+ had cancelled this TV series, instead?

STD is so intensely horrible that I cut on an episode only to find myself realizing the episode has ended and I haven’t even watched it, all while staring at the TV the entire time. I have absolutely NO IDEA what has taken place because it is so dreadfully boring it simply cannot hold my attention throughout an entire episode. This is SHAMEFUL for a Star Trek series! I can watch and rewatch all of the Star Trek series ever made and know everything about all of them including episode names, yet I can’t even sit and watch this bland… Read more »

GOD D@#$ they refuse to cancel this trash now matter HOW low it goes in the ratings. This kind of crap is why we can’t have watchable Star Trek any more. Burnham is the face of 1 00 billion dollar franchise turning into a 100 million dollar franchse.

It’s a dumpster fire… Star Trek fan since the 70’s so I have an opinion on how the spinoffs have progressed through the years. STD is literally the only one I have a problem with. By God I wish someone with competence would take the lead and start a new show in respects to what Star Trek is about at it’s very soul. The trash fire of STD has to go.

I am a long time Trek fan. Season 1 and 2 were really enjoyable to watch. They held my attention. There was danger, conflict, excitement. Although the season one finale kinda tied things up just a little bit too neatly and quickly regarding the Klingon/Federation war, but I was willing to forgive that. Season 2 was exciting and a love letter to fans of the original series and even the original pilot of TOS. But Season 3 and Season 4 (so far) have just felt so tiresome and like I’m watching “This is Us”, but aboard a Federation starship. I’m… Read more »

As a long time Star aTrek fan (of all the Star Trek spin offs, and having just gotten turned on to STD, I would like to say that I love STD! I hope it goes on for many more seasons!