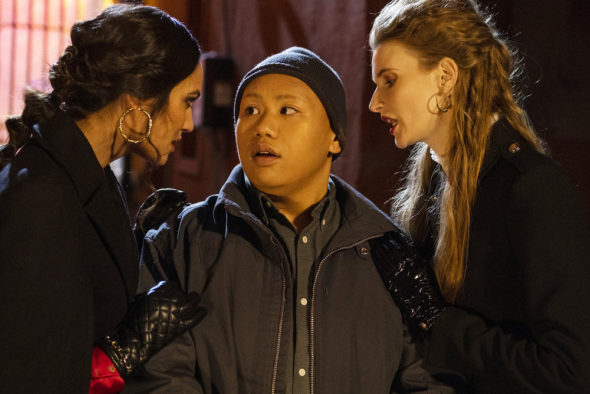 It’s a tale of an unlikely hero. Has the Reginald the Vampire TV show been cancelled or renewed for a second season on Syfy? The television vulture is watching all the latest cancellation and renewal news, so this page is the place to track the status of Reginald the Vampire, season two. Bookmark it, or subscribe for the latest updates. Remember, the television vulture is watching your shows. Are you?

Airing on the Syfy cable channel, the Reginald the Vampire TV show stars Jacob Batalon, Savannah Basley, Em Haine, Mandela Van Peebles, Aren Buchholz, Georgia Waters, Marguerite Hanna, and Sean Yves Lessard. In the story, young Reginald Andres (Batalon) lives a life of dreams deferred. One night, he meets a stranger named Maurice Miller (Van Peebles), who decides to help Reginald achieve what he wants. However, Reginald is killed by Maurice’s enemies, and the only way to “save” him is to make Reginald a vampire. Now, Reginald must learn how to survive his new and impossible lifestyle, which means keeping his nature a secret from everyone he knows. Along the way, Reginald manages more than just survival and discovers untapped abilities inside himself. Reginald becomes a better man as a vampire, but some powerful vampires want him eliminated. It turns out that the undead life is just as complicated as life itself.

The first season of Reginald the Vampire averages a 0.05 rating in the 18-49 demographic and 184,000 viewers in the live+same day ratings (including DVR playback through 3:00 AM). While these numbers don’t include further delayed or streaming viewing, they are a very good indicator of how a show is performing, especially when compared to others on the same channel. There can be other economic factors involved in a show’s fate, but typically the higher-rated series are renewed, and the lower-rated ones are cancelled. Find out how Reginald the Vampire stacks up against other Syfy TV shows.

Will Syfy cancel or renew Reginald the Vampire for season two? The cable channel doesn’t have many original scripted series these days, so keeping this show would help to fill the schedule. The early ratings are good, so I think there’s a good chance the series will be renewed. I’ll update this page with breaking developments. Subscribe for free alerts on Reginald the Vampire cancellation or renewal news.

What do you think? Do you hope that the Reginald the Vampire TV show will be renewed for a second season? How would you feel if Syfy cancelled this TV series, instead?

I love this show, please renew Reginald the Vampire for Season 2!