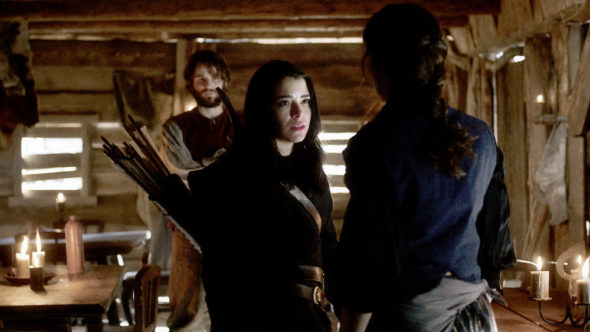 Will the good guys be victorious? If so, at what price? Has the Van Helsing TV show been cancelled or renewed for a sixth season on Syfy? The television vulture is watching all the latest cancellation and renewal news, so this page is the place to track the status of Van Helsing, season six. Bookmark it, or subscribe for the latest updates. Remember, the television vulture is watching your shows. Are you?

Airing on the Syfy cable channel, Van Helsing, stars Kelly Overton, Jonathan Scarfe, Tricia Helfer, Aleks Paunovic, Kim Coates, Keeya King, Nicole Munoz, Jesse Stanley, and Jennifer Cheon. The show centers on Van Helsing descendent Vanessa “Van” Helsing (Overton), who awoke from a coma to find vampires had overtaken the world. A prime target for the vampires, she’s also humanity’s last hope with her immunity to vampires and her ability to turn them into humans. In season five, Vanessa, Violet (King), and Jack (Munoz) risk everything to finally bring an end to the Dark One, once and for all. The Van Helsings must figure out ways to escape and evade the various obstacles in their path to prevent them from their mission, leading to an epic final showdown between the Van Helsings and the Dark One.

The fifth season of Van Helsing averaged a 0.04 rating in the 18-49 demographic and 220,000 viewers in the live+same day ratings. Compared to season four, that’s down by 48% in the demo and down by 26% in viewership. Find out how Van Helsing stacks up against other Syfy TV shows.

We don’t have to wonder if Syfy will cancel or renew Van Helsing since it’s already been announced that season five is the end. I’ll update this page with breaking developments. Subscribe for free alerts on Van Helsing cancellation or renewal news.

What do you think? Do you wish that the Van Helsing TV show had been renewed for a sixth season or, is season five a good time to end this Syfy series?

i love the show so much. it would need some serious new directions in order to warrant more seasons IMO. like a whole new arc. stretching out the current main story with the dark one and the “present” Vanessa is “in” would not be beneficial. but i would so love to see like a future where eg society has been rebuild to a degree and maybe like the new order of things leads to some kind of subtle curruption of the less fortunate and a new path for evil to grow. and there could be a group of van helsings… Read more »