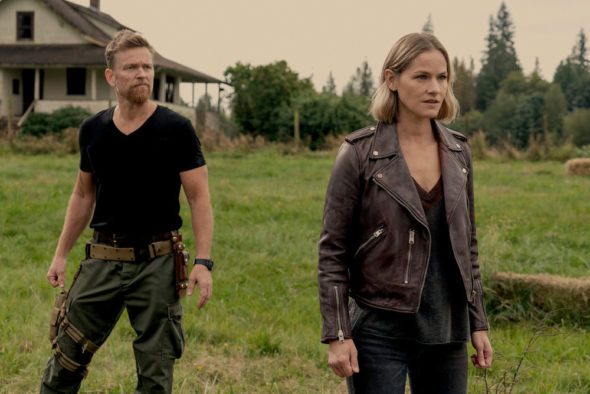 The end of Van Helsing is closer than we thought. Syfy has announced a schedule change for the final four episodes of the fantasy horror series.

Van Helsing, stars Kelly Overton, Jonathan Scarfe, Tricia Helfer, Aleks Paunovic, Kim Coates, Keeya King, Nicole Munoz, Jesse Stanley, and Jennifer Cheon. The show centers on Van Helsing descendent Vanessa “Van” Helsing (Overton), who awoke from a coma to find vampires had overtaken the world. A prime target for the vampires, she’s also humanity’s last hope with her immunity to vampires and her ability to turn them into humans. In season five, Vanessa, Violet (King), and Jack (Munoz) risk everything to finally bring an end to the Dark One, once and for all. The Van Helsings must figure out ways to escape and evade the various obstacles in their path to prevent them from their mission, leading to an epic final showdown between the Van Helsings and the Dark One.

The fifth and final season of 13 episodes debuted on April 16th with one episode being released each Friday night. The series finale had been set for July 9th.

Syfy has now decided to finish airing the four remaining installments ahead of the Fourth of July holiday. Three episodes run tonight, June 18th, starting at 8:00 PM. The series finale airs next week, on June 25th, at 10:00 PM.

The move was reported by Syfy Wire but seems to have caught others unaware. It’s likely that most fans won’t be aware of the shift and the ratings will suffer. Photos of the newly shifted episodes are not yet available on the Syfy press site but, here are some brief descriptions of the four final episodes:

Season Five, Episode 10: E Pluribus Unum
Friday, June 18, 2021 @ 8:00 PM
Axel and Violet inadvertently save an important figure from America’s past who could help them turn the tide in their fight against The Dark One.

Season Five, Episode 11: Undercover Mother
Friday, June 18, 2021 @ 9:00 PM
As The Dark One yearns to release her full power upon the real world, her plans are interrupted by a strange visitor to the White House.

Season Five, Episode 12: The Voices
Friday, June 18, 2021 @ 10:00 PM
Vanessa, Axel, Jack, Violet and Ivory finally reunite in the real world and begin their plan to take down The Dark One.

Season Five, Episode 13: Novissima Solis
Friday, June 25, 2021 @ 10:00 PM
Vanessa, Violet and Jack face off with The Dark One in the ultimate battle to save humanity.

What do you think? Have you enjoyed the Van Helsing TV series? Are you disappointed that there won’t be a sixth season for this Syfy show?

sucks they have to end a fantastic show! i’m devastated and disappointed. I’ve been following the VanHelsing shows and movies for most of my life. Memories of my mom and I watching the movies when I was a kid–sucks to see the funny, modern-spun, sarcastic, never dull–cast and characters leaving the (metaphorical) big screen (my laptop)—hopefully the actors continue doing more work so I can follow them on their new journeys–and even more, hopefully this isn’t the last of Vanessa and her crew.

Im bummed they cancelled the series I loved this series,disliked the end.

I want see a season 6 were Vanessa not dead axel somehow keep her alive in medical facilities that her kids do not know about .group may had spilt up .but will rejoin I like see Vanessa teach her kid everything she knows pass on torch they fight kill all vampires try bring back new evil.more discovery along way.plus axel and vanessa admit feeling for each other .they find out blood haired women that was by truck that one of females met is new kind of evil they discover.

Watched it from the very beginning . Loved the show and all its characters. Thought the Van Helsing daughters were a great addition . For its budget and the dedication of the actors 4 Stars out of 5. Criminally underrated show.

No the show really started to suck in the final season

I can’t wait till the finale , I’ve watched the show since it came out . Though I think this series ran its course. No sense in dragging it out any longer for another season . I’am glad it’s coming to and end.

I thought I would try to watch the final season but I didn’t keep up with when it was returning and I already watch too much on a Friday and have a dvr that stays full, mostly because it has a small hard drive though. I might try to watch it on demand since I watched all the other seasons. Season 4 was so awful though. The grown Van Helsing daughters were so terrible it was really unwatchable. It seems like a really bad idea to have added them. Van Helsing has had some other cringe stuff and questionable things… Read more »

I was glued to my tv last night for the three episodes. Hate to see it go but all good things come to an end

I’m one of the people who was expecting one episode tonight and missed the first two and has to catch them at 2 AM onward.

I’ve watched since the beginning,but the story DOES have to end at some point.It’s been flawed but I’ve stuck with it.