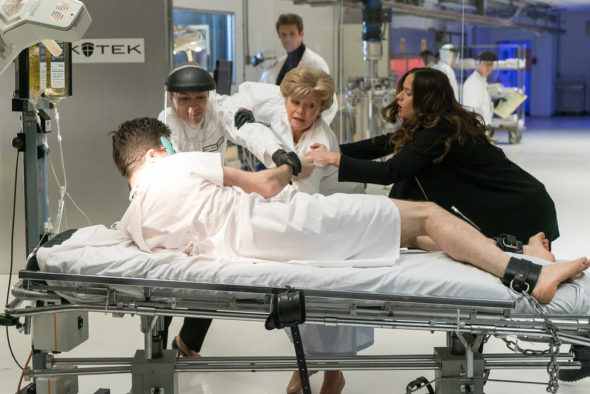 The hunt continues. Syfy has renewed its Van Helsing TV show for a third season. The season three renewal comes a couple of weeks ahead of the second season finale, which will air on Thursday, January 4, 2018 at 9:00pm ET/PT. The Syfy TV series is a new twist on vampire hunting, inspired by Dracula. Season three, which will contain 13 episodes, should begin production in February.

A supernatural Syfy horror drama, Van Helsing stars Kelly Overton, Jonathan Scarfe, Christopher Heyerdahl, David Cubitt, Vincent Gale, Rukiya Bernard, Trezzo Mahoro, Tim Guinee, Laura Mennell, Paul Johansson, Aleks Paunovic, and Hilary Jardine. It centers on Vanessa or “Van” Helsing. Van awoke from a coma to find vampires have taken over the world. Since she is immune to vampires and can turn them into humans, this vampire hunter is their prime target.

LOS ANGELES, CA – December 19, 2017 – SYFY renewed action-horror series Van Helsing today for a third season. The hour-long drama will wrap its Season 2 run on Thursday, January 4 9/8c and return next fall with 13 all new episodes. Production on the new season is expected to begin in February 2018.

“I couldn’t be happier to learn that SYFY has renewed Van Helsing for a Season 3 – it has been a wonderful journey thus far, but we have much more of the ‘Van Helsing‘ saga to tell before we’re through,” said Showrunner Neil LaBute. “It’s great to be working with SYFY on this project again, along with Chad and Mike at Nomadic and all the others at Dynamic and Echo Lake as well. The writing team has some amazing adventures planned for our cast and a few new surprises as well – expect blood to be spilled and characters to die screaming while the fate of humanity slips closer and closer to the edge of true chaos and utter darkness.”

“We are thrilled to be coming back for a Season 3 of our beloved Van Helsing. Neil LaBute, our writing team, returning directors and amazing cast are suited up and ready to go into battle once again,” said Chad Oakes, Executive Producer and Co-Chairman of Nomadic Pictures.

“Here’s to another year of creating the ‘God Damned Apocalypse’ that is Van Helsing. Hope everyone enjoys watching it as much as we enjoy making it! Thanks to SYFY, Neil LaBute and our entire team of creative artists,” added Michael Frislev, Executive Producer and Co-Chairman of Nomadic Pictures.

“Thank you to Syfy and to all of the dedicated cast and crew,” added Daniel March, Managing Partner, Dynamic Television. “It’s exciting to continue the Van Helsing legacy and to deliver another season for our global fans.”

Van Helsing is a total re-imagination of a timeless brand, set in a world dominated and controlled by vampires. Season 2 pushed Vanessa and the other survivors further into the world of the vampire apocalypse, where they discovered old alliances have crumbled and new connections expose long-buried secrets about the Rising, the Van Helsing heritage, and the survival of humankind itself.

What do you think? Are you a fan of the Van Helsing TV series? Did you think it would be cancelled or renewed for season three on Syfy.

So Happy for this show to continue for it’s 3rd season.

Just love it!! It’s different and can’t tell which way its going. So that is good. have to watch it to see what hapens next

Absolutely love the show, watched both seasons over 3 days. Can’t wait for season 3 to come out

Love the show. Good to hear season 3 will happen

I’ve watched both seasons and love the show. It is suspenseful and very entertaining. I am thrilled with Season 3 continuing the Saga of Vanessa. Keep doing great work!!! ❤️❤️❤️

THANK YOU SYFY, for renewing VAN HELSING!!
……If you now could “only” renew DARK MATTER again, the “SYFY-Nerd-in-me”, could finally feel complete. 😉

Yeay!!!!!! 😀 I’m excited and grateful, that SyFy has listened to us “Fans”, and given this show more time to establish the adventures, story and caracters, of VAN HELSING. I am more and more ” addicted” to this show. Sure…it’s got a couple of episodes, that’s “less good than others”; but so does every tv show that’s out there! I’ve seen season one of Van Helsing three times now, and will give season two; which I’m recording every episode of; the same attention, after next Thursday. I notice, that when I watch the episodes again, I ALWAYS seem to notice… Read more »

I am addicted to this show now! I binged watched the first season, and look forward to every new episode. This show is the Walking Dead for vampires, LOVE IT!

I’m really glad that it got renewed. The show really stepped up it’s game this season, imo.