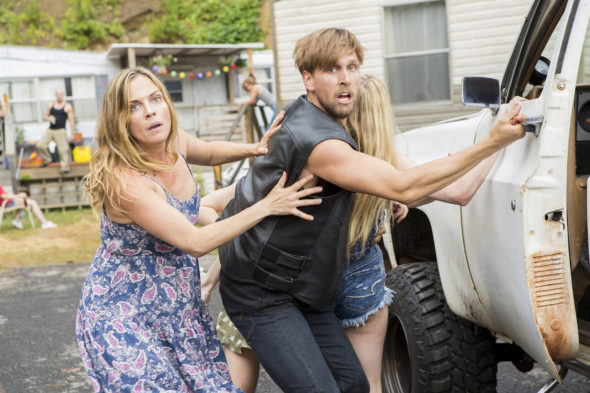 It’s goodbye for Too Close to Home. A spokesperson for TLC has confirmed to TVSeriesFinale the Tyler Perry series has been cancelled after two seasons.

TLC has not released a public statement as of reporting.

What do you think? Have you seen Too Close to Home? Are you disappointed about the cancellation?

I was a huge fan of Too Close To Home Series. I’d love to see it come back. So many of the scripts seem more like real life events. The actors were all excellent.
Please rethink & bring this series back

I agree Deborah. I loved that show. I just now realized WHY the next season has never started. Please bring my show back, TLC.

I’m very upset that, “Too Close To Home”, by Tyler Perry, was cancelled. It was Awesome, and I want to see it come back. I was looking forward to season 3. Please bring it back! The ratings was low because it was on the wrong channel! Take it to another channel and bring it back please???

Really sad this show was cancelled. It was really good.

Maybe TLC didn’t like Tyler’s writing. Maybe someone else didn’t like it and complained. We can still hope that Tyler will bring it back.

I think that show was wonderful. Loved Brock’s character. Would love for Tyler to bring the show back; maybe on another channel. Let’s hope he will.

Why was Too Close to Home by TLC cancelled? Second season rating were increased.

TLC is the channel it was on. Tyler Perry is the one that owns this show. I hope he takes it to a different channel and brings it back.

Why was this cancelled when ratings were up the 2nd season??

Please bring the show back because I was really into it. Im still hopung it eventually will return. No reason why it went off the air.

I just finished watching the season 2 of the awesome series and I wish the 3rd season is out. TLC why?
Pls bring that out already. Smiles