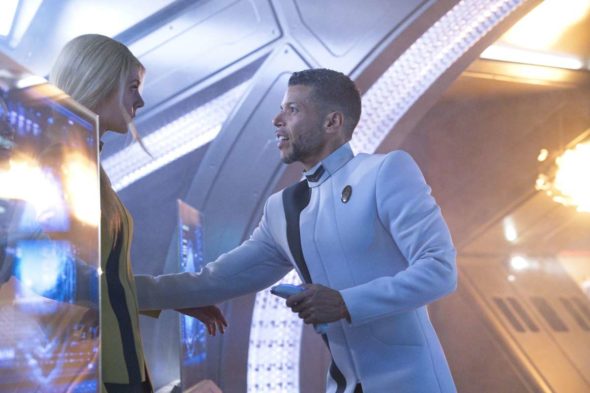 A Paramount+ sci-fi series, the Star Trek: Discovery TV show stars Sonequa Martin-Green, Doug Jones, Anthony Rapp, Mary Wiseman, Wilson Cruz, David Ajala, and Blu del Barrio. A prequel to the original Star Trek series, this drama follows the crew of the USS Discovery of the interstellar government known as the United Federation of Planets (UFP). Season four finds Captain Burnham (Martin-Green) and her crew facing a threat unlike any they’ve ever encountered. With Federation and non-Federation worlds alike feeling the impact, they must confront the unknown and work together to ensure a hopeful future for all.

Only on STD can you sabotage your ship, allow criminals to escape (but it’s ok because one of them is your captain’s lover), nearly destroy the human race along with your home planet and your allies home planet, and then be trusted with the only chance to stop the criminals from doing something (I don’t know what because the show is too boring to really pay much attention to) but the saboteur blows up the criminals. But wait! The criminal lover of the captain isn’t dead in the blow up and is beamed aboard the Discovery. Oh no! The transporter… Read more »

Season 4 of Star Trek Discovery is terrible. So much smugness, inauthentic emotion (please stop with all the let’s talk about our feelings garbage), characters are annoying and unsympathetic and there’s very little plot. No inspiring adventure sequences.

If paramount + does not renew discovery I will cancel my subscription

Star Trek discovered is an emotional train wreck. I guess like the old saying goes, some people just can’t look away. It has already trampled much of ST canon underfoot and I’m betting Rodney would be totally disgusted with it’s debase and work story lines. I know I am.

The only good thing on STD is the F/X. the show seems to be written by the high school sheman drama club. A new DEATH drama every 5 min with no clue from the Ultra high tk ship a asteroid FIELD is about to hit the ship WOW!!! Truly a garbage show with good special effects for the special need crew and their special Feelings expressed Excessively.

Be nice to actually be able to watch in the rest of the world. Nice one Paramount. Next time set up the channel before premiering a series.

so are they back in theirown time now?